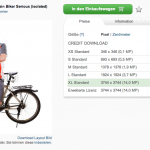 Yesterday, I received an email from Fotolia which confused me because my first images are now about six months old, and the newsletter was telling me some news regarding those files I did not know before. 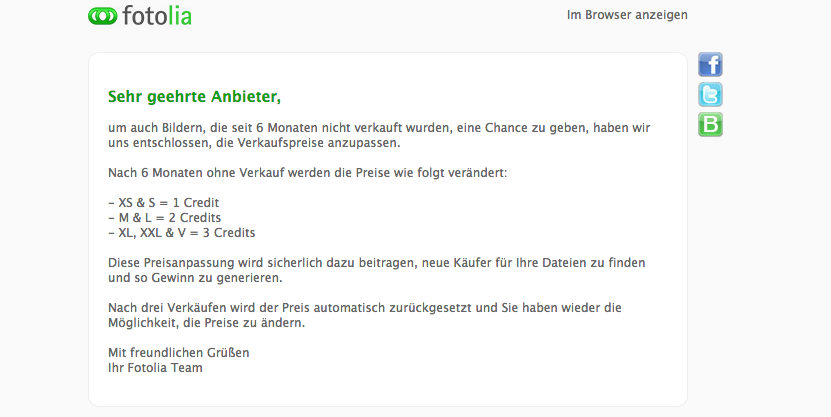 Apparentely I was not the only contributor confused about that: Fotolia had just announced a massive price reduction for a huge part of the library. In my case, only about 15 per cent of my images had sold within the first few months, so it affects about five out of six images in my portfolio.

And the reduction was immense: The announced prices to a 1/2/3 system would have made my images in a billboard resolution available at about 3 Euros! Well, luckily it did not last long. At least today I have seen the images return to a slightly less catastrophic pricing, making them 1-6 credits depending on size.

Well, the quick change back to a more reasonable (is it?) pricing system could be interpreted as a reaction to contributor protests in the forums and outside. Or maybe they just used the old method of first providing terrible news to make the “just a bit bad” news look better. So by first putting a price to the bottom and shortly later raising it a bit, it looks so much easier to understand why those prices had to be cut by just 30-40 per cent instead of 70 per cent. Right?

The price war iStock has started

Well, the headline for this paragraph might be misleading. Obviously iStock’s new pricing for the main collection is just a reaction to where the prices on other agencies already are. But in recent years it looked like iStock was willing to lead the market to higher price levels and the others had the choice to follow or keep the crumbs on the bottom.

With iStock’s decision to re-enter the low parts of the market with the new main collection, the competitions seems to feel the little punches and the current price reduction at Fotolia – let us hope it remains where it is now – might be a reaction to that. Obviously I liked Dreamstime’s reaction of raising their upload limits much better.

We will have to wait and see how things are playing out. The good news is that most agencies are already far lower than iStockphoto was in the past, so they might not feel the need to price images even lower. Then again, I am a bit worried that more agencies are going to be in financial trouble as the market is going to consolidate, and those agencies don’t have much too lose, especially not their reputation in the contributor base.