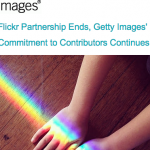 The stream of news seems not to end these days: After Getty had announced its new Embbeded Viewer and iStockphoto plans to start a new subscription offer, an email was sent out to Flickr contributors who were part of the Getty-Flickr partnership over the last five years. Apparently, the contract is running out and Getty has decided to not extend it. 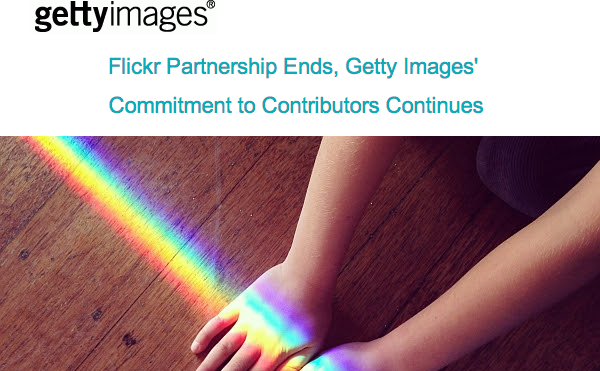 Getty had scouted talent on Flickr for the past years and invited them to upload selected images from their streams to the licensing platform. They were offered at the same prices as Getty’s other collections (as RF and RM) and photographers were paid just like the professionals. This had caused some discussion among the professionals back then.

This might come as a surprise because Flickr has certainly helped shape Getty’s profile as a platform for crowdsourced images along with the microstock platform iStock. However, if you have read my article on why (in my beliefs) Getty has decided to allow bloggers and social media users to use their images for free, you will remember my thoughts that Getty is trying to reposition itself as a publishing platform, offering advertising across the internet.

Well, this is what changed between Getty and Flickr in the last five years: Getty had seen the image user market split in two parts, the small, private, non-commercials users and sharers on the internet and the professional, commercial, paying users in corporations. The partnership meant a connection between those two worlds.

These days, Getty seems to have finally figured out that these are not two different worlds but one global market place (considering that even images used “for free” can be a market) and wants to enlarge its own profile. In this area, Flickr already is very strong and directly competing with Getty in the upcoming years: Besides a small number of professionals and ambitious amateurs, Flickr also holds billions of images that have no apparent commercial value (and the photographer no commercial interest) and which can be used under free licenses like Creative Commons.

Therefore, it makes sense for Getty to sharpen their profile as an opposing offer with a mostly professional and edited collection of images to be used for the very same purpose in competition to Flickr’s offer.

By the way: All existing Getty-Flickr contributors have been invited to upload images directly to Getty moving forward, including their very own mobile app Moment. Along with an also announced cooperation with Berlin startup community EyeEm, this seems to be a way for them to continue their crowdsourcing efforts.

In case you are wondering: I have been part of the Getty-Flickr program with a handful of images, I have decided to leave them with Getty for the time being. I might even try to submit new images to their new Moment collection. As you know, I am not a big fan of Getty’s ways of dealing with photographers, I am still curious in what they are doing. Despite my criticism (and my skepticism if they are capable of understanding the market), they are still the global market leader and are likely to stay in that position for the time being.