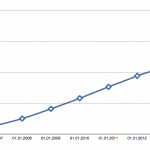 Based on a forum thread, I started to investigate the growth of the iStockphoto collection of files in recent years myself. As iStock has removed any reference to library size, queue length or anything else (by itself already a sign of admittance that any comparison would not make them look good), there is some guess working involved.

However, we have a few starting points: The file numbers were sequential for most of the time iStock existed. At the end of 2013, the file numbers were in the range of 32.4 million – at the beginning of 2013 this was at 22.7 million. You can go back year on year to figure out how many files were uploaded each year. I did that for a couple of years. Sequential numbering has only changed in September 2013 when files were only getting even numbers, so every second number since then doesn’t exist in iStock’s library. 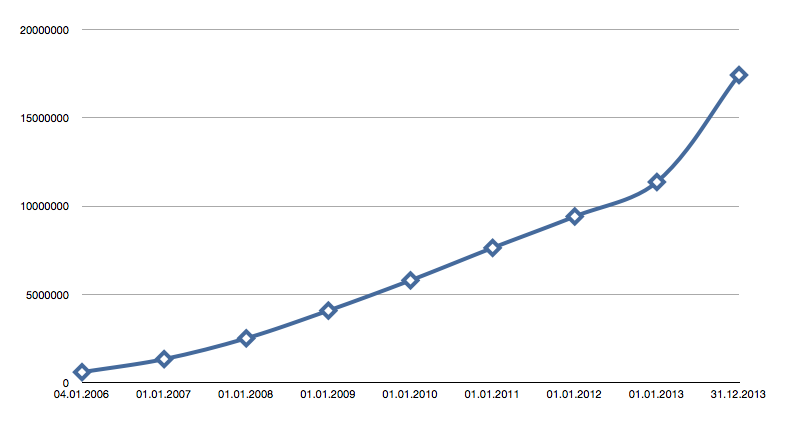 Historical evidence was that about 50% of images submitted ended up in the collection. Some were deactivated by the author, some were rejected. With the new criteria the only reasons for rejection seem to be for legal issues. My estimate (or guess) is that today about 90% of all submitted images are being accepted.

Also, I made a very broad search including a lot of common terms with an OR connection. I was able to get a search resulting in 13.3 million photos being shown. This probably represents more than 80% of iStock’s photo collection and should be representative to gather more details. Drilling down with the exclusivity and price range filters, I was able to identify a few numbers:

Percentage of exclusive files has dropped to 41%

Especially the first number is a bit surprising. From prior searches I have done in past years, I always found somewhere between 50 and 55% of the images are exclusive. This number has significantly dropped in the past year. How did it happen? Well, obviously by opening the gates for all non-exclusive uploads last April.

So exclusives have done a great job by uploading about 30-40% more images in 2013 than in 2012. But non-exclusive uploads have grown from 1 million to 4.6 million last year. And there is no indication this would stop anytime soon. As seen from Shutterstock, there are enough non-exclusives out there producing high quality files in masses. If all of them would also be uploaded to iStock, non-exclusives could even double their uploads.

How are contributors doing with this growth?

Now here is a difference: The number of paid downloads at Shutterstock has risen by 31%. And the average revenue per download has risen by 5%, adding up to about 37% of year on year growth. This almost matches the collection growth of 38%, basically the revenue per file is stable.

At the same time, iStockphoto has rejected to publish any business number for a couple of years now. There were times when iStock was happy to announce new records in revenue and in royalties paid to contributors. And I believe any company is happy to announce new records. The only reason iStock is not publishing numbers seems to be there were no records for the past few years. iStock has not grown or at least not grown fast enough to even compensate for the reductions in royalties paid out.

The main reason why exclusivity at iStock was very attractive in the past was that a lot of revenue was shared across a very small number of files (compared to other agencies). The last numbers we know were a revenue of around $300 million when the collection was smaller than 7.5 million files – basically iStock made about $40 revenue for each file in their collection. With no or very small growth in revenue in recent years but a fast growing collection, nowadays those $300 million are split across 17.5 million files, cutting the revenue per file to around $17.

Shutterstock is still short of that by making $230 million in revenue with around 32 million files, equalling a revenue of $7 per file. Then again, contributors at Shutterstock are non exclusive by default, so they can generate additional revenue from other sites.

There is no indication this trend is breaking soon: The continuing changes at iStock indicate that the site is not successful in gaining new revenue (why would they dramatically change everything if it was successful?) while Shutterstock keeps reporting record numbers almost every quarter.

We all know, the golden years of microstock are over. We will never get back to those revenues we have seen in 2009 or 2010. But the numbers above indicate that we are not at the end of the downturn, at least for iStockphoto. I doubt they will stop adding new images but I also can not see how they would gain new clients and more revenue by just copying things that are already in the market. So my assumption is that the revenue per file is about to cut in half again over the next two years. Make sure to adapt your business plans for this.