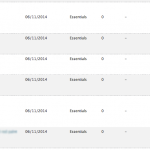 No Thumbnails showing for images from last week

Okay, once again iStock is ignoring a problem because it’s not so important. It only affects contributors and wastes their time, so they don’t even want to have it discussed. Forum posts are being deleted, so it doesn’t appear to be a big issue.

The problem: Since last week, on a lot of uploads the generation of thumbnails fails. It was delayed at first, thumbnails would appear on most downloads after a few hours. However, there are still images uploaded on November 6 that don’t have any thumbnails showing.

As someone told me through my Facebook page, some iStock admin has given more technical details on the issue in a closed Facebook group (I have dropped being member of those more than a year ago, so I can’t tell directly what has been said). So apparently to get at least a bit more insight into iStock, you have to be a member of those Facebook groups rather than looking into the iStock forums these days. Not that it would be much more helpful because apparently the status given is “it will catch up soon” which was given out five days ago. If you know more about this or have any knowledge of more recent statements somewhere, I’d appreciate if you drop my a note.

For a non-exclusive contributor, this might not (yet) be a big issue since inspection times are usually 7-10 days right now. There is still the odd chance that iStock is going to fix the problem before those images enter the inspection process. However, some exclusive contributors have reported their images have not been reviewed within the usual 24-48 hours due to this problem.

While the “official” recommendation is to leave the files in the queue, I don’t see a point in doing so when iStock is not sharing details about the problem and how and when it is going to be solved. Since there is no actual and honest information around from iStock, and given the historical evidence of their understanding of “soon”, you just risk to have your images stuck for months if you follow their advice. I wouldn’t risk that, especially not if I have seasonal images to upload at this time of the year.