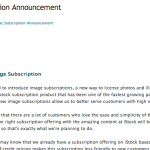 Last night, iStockphoto announced a new subscription program for most of their imagery to be launched in April. It looks like it is meant to be more competitive with Shutterstock. At least for the clients.

Why is the existing subscription offer not enough?

Actually, we have to talk about more than “the existing offer” – in 2008, iStockphoto had launched its own subscription offer to compete better mainly with Shutterstock. Other agencies like Fotolia or 123RF also had subscriptions as part of their offer. Based on what most contributors were thinking about subscriptions, the offer was made to suit both sides: The customer would get a fixed number of credits per day at a heavily discounted price but the images still had to be paid based on size – for example, with 30 credits per day the client could either get 30 extra small sized files or maybe 5 large resolutions at 6 credits each. The system was not really that competitive after all, and it started to get far more complicated when iStock introduced Vetta in 2009, followed by price raises and new collections at least once a year. Today, a 35 credits per day subscription only allow one Medium Signature+ or five Small Signature files while he could get 25 high resolution images at Shutterstock.

As a better offer for clients, Getty relaunched its Thinkstockphotos site allowing the client to download 25 images in high resolution per day. The images offered were partly sourced from iStock, partly coming through the old StockXPert site they had aquired along with Jupiter Images, and partly from their own Getty Images library.

Apparently that offer failed to attract enough clients as well. The second partner site, photos.com, has announced to stop offering their services on March 10. And Thinkstock still look likes a nice add on to iStock for non-exclusive contributors but apparently didn’t win significant amounts of clients on its own. In the meantime, Shutterstock announced another record quarter and record year for 2013.

What is in it for contributors?

The new subscription program at iStockphoto is meant to solve that problem: According to the announcement, it will include all Main Collection images – and there will be a review of exclusive images which failed to perform well, so these will be dropped to the Main Collection before the launch. Based on current numbers, it will contain at least 60% of iStock’s image offering. In addition, iStock will offer a – probably higher priced – subscription offer which is going to include Signature and Signature+ images. All combined this would include almost all images with the exception of Vetta files.

As royalties, iStock announced it will pay $0.28 for all non-exclusive downloads, matching their existing partner program downloads. This is slightly more than Shutterstock is offering for new members. For comparison: I get $0.36 for subscription downloads on Shutterstock these days. Fotolia is paying me 29 cents but in my case this means Euro cents, equalling about $0.38. iStockphoto will be at the low end of that scale, not surprisingly of course.

Exclusive members will be better of: They will get $0.34 per subscription downloads in the Main Collection. Woops, even this is less than what Shutterstock pays for their (all non-exclusive) contributors on the third and fourth earning level? Yep.

Now here is the catch: Obviously they can not be too generous these days. So for these really high subscription royalties you can not expect to earn Redeemed Credits as well for your annual stats, right? Oh well, not that these would ever have really mattered, did they?

And a funny side note: iStockphoto is not going to provide live stats on those new subscription downloads. They will be reported along with the partner program downloads. Which also means, you will not get to see a lot of details of when and what files were sold. And don’t be surprised if they ask you to pay some money back half a year after they paid you.