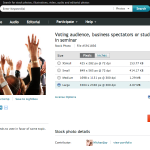 So, just after having executed the restructuring of their collection system, reducing the confusing 7 different price points to four, iStockphoto just announced (and executed) two more changes to their website: A reduction of prices for the low-end Main collection to a simple 1, 2, 3 credit pricing and a new interface to present search results.

This is most likely a more dramatic change than anyone would have anticipated: iStockphoto has lowered their prices. And this is a partly dramatic reduction as the new price structure is a simple system adding 1 credit for each file size. It affects more than half of iStockphoto’s library as well, all non-exclusive content plus a certain amount of exclusive files which had been moved to down to the Main collection. A test search indicated about 60 per cent of photos are priced in the Main collection right now. 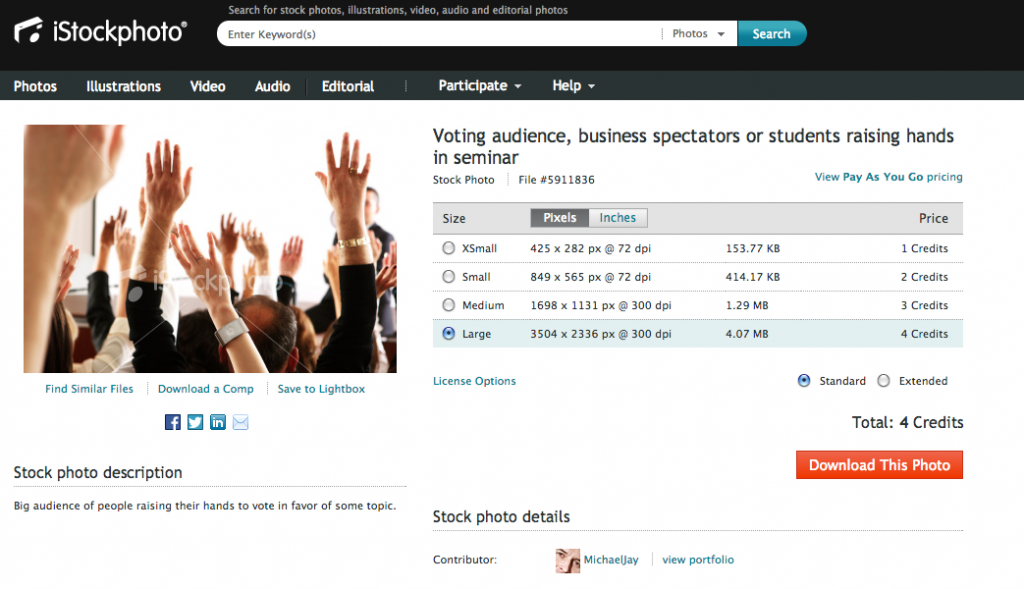 A reduction of pricing in this extent has certainly not been expected. It follows many years of raising prices between 2006 and 2010 and an area of stability (except adding more high-end collections on the way) for a few years. To me, the change indicates a complete shift in strategy for iStockphoto. At one point, iStockphoto was the leader of the microstock market, offering images at low prices – then iStock was lead by Getty to achieve a higher price level within the newly opened markets of small businesses that had not used the classic channels. But as many other places exist, iStockphoto probably has lost a lot of clients during these changes as the prices became less competitive. At the same time, Getty Images had pushed Thinkstockphotos and photos.com (which was dropped in importance at some point as it seems) as their subscription offers for cheap imagery.

The turn in strategy now seems to be to get iStockphoto back to be more competitive with other microstock agencies. As can be seen from the samples below, prices at the main competitors Fotolia and Dreamstime (cutting out the subscription offers from Shutterstock for this comparison) are significantly lower for large sizes than iStock’s old offer, partly up to half the price. 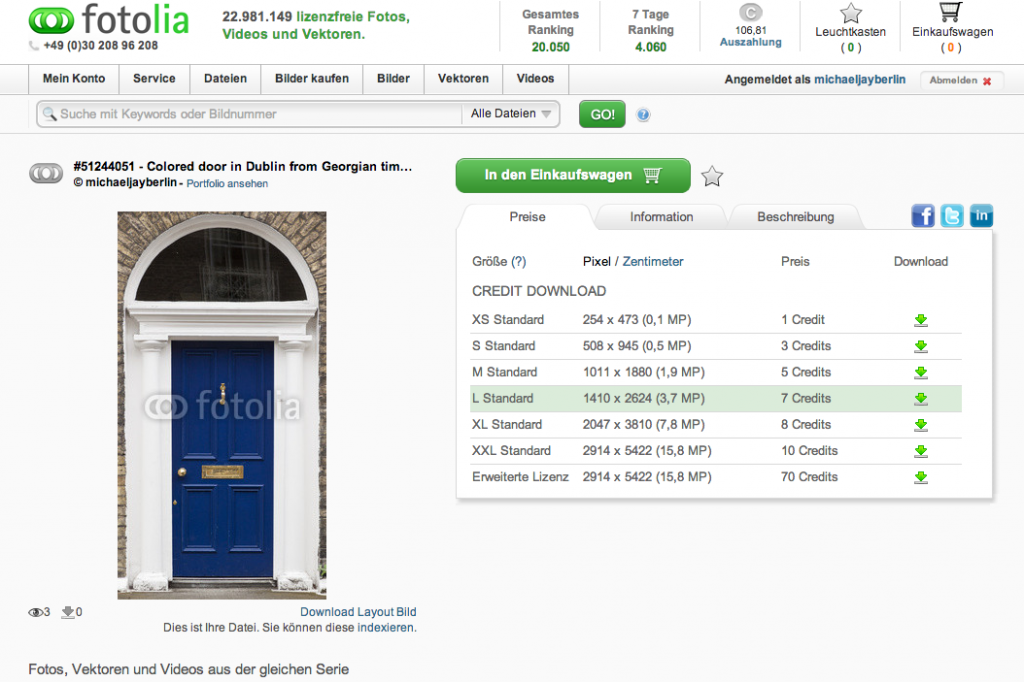 Pricing by size at Fotolia 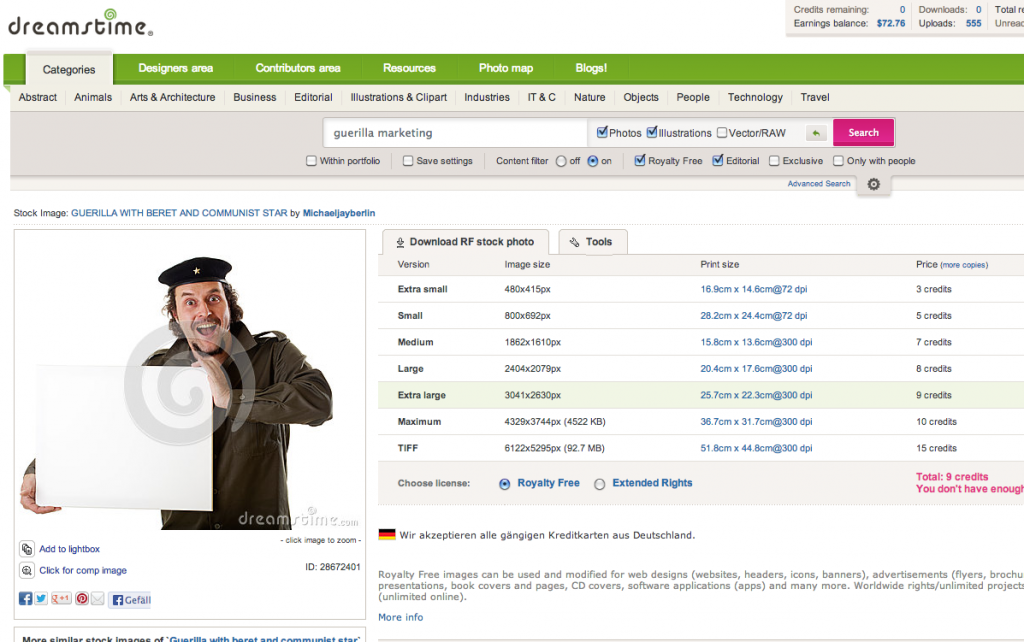 With the new pricing, iStockphoto looks like it is the price leader in the microstock market, at least among the big players and for large sizes. This is not really true because the credits cost a bit more on iStock than on the other places and the Single Image Sales price is significantly higher than the credit price. However, the impression for the client will be the same.

From a client perspective, this move certainly is helpful to gain market share. If clients who left in the past will return to iStock can be doubted as it usually is harder to win back a lost client rather than finding a new one. But the microstock market consists of a lot of one-time buyers who are looking for images for a single project right now and will not return for years. For those clients, a price comparison is probably a convincing argument besides the choice of images. It might overall improve iStock’s market performance.

The collection changes had a very positive effect on my personal portfolio, downloads and royalties have surged along with the move of all of my files to the main collection. As the change in my performance can be specifically seen after June 13, I have no doubts this is directly connected to the changes.

I can’t say if the client base started buying more images after the change, if more new clients could be convinced quickly or if the search algorithms started favoring my (cheap) images a bit more. But the result is quite visible. The new change will reduce the prices for my images once more.

Thanks to StockPerformer, I was able to quickly have a look at how my royalties are distributed by file sizes bought:

As can be seen, only very few royalties are coming from the smallest size which is not going to change in price. Small sizes will change from 4 to 2 credits, Medium sizes from 7 to 3 and Large sizes from 10 to 4 credits, overall a reduction of a bit more than 50%. I assume this will impact my overall royalties.

However, Single Image prices have not been reduced (yet). Also, the smallest Credit Package these days is for 30 credits – far more than the 12 or for some time 6 credit packages available. I am not sure when this was changed but it appears to be recent. This means more clients are pushed to buy through the Single Image process rather than packages.

Also, it could be speculated that clients are more likely to buy a larger version than they might currently need because the difference in price is just marginal nowadays. So the percentage of larger sizes might grow a bit above the recently seen distribution.

So I assume – along with the unchanged XS size for 1 credit – the overall reduction in royalties will be a bit less than those 50 per cent. But all in all, Royalties Per Download (RPD) will be significantly lowered by this change.

The RPD at iStockphoto has been around $1.50 for me since I went non-exclusive while I received an average of about $0.90 at Fotolia and $0.75 at Dreamstime but both include a significant part of subscriptions. For the credit-based sales, I assume iStockphoto will move to the bottom end. Beyond the competitive prices, iStockphoto offers the lowest percentage in the market – this was acceptable as the prices were higher. With the new pricing, I feel much less inclined to upload images to iStockphoto. I will not stop uploading but there will be much more consideration to upload images exclusively to one of the other sites which offer rewards for exclusive imagery – beyond the higher-end images I try to produce for Stocksy United and Westend61 these days.

For exclusive contributors, there seems less direct implication, though many of them have a part of their imagery in the Main collection as well. However, looking at the iStock site alone, the gap in pricing between Main and higher collections has grown significantly due to this move as well. The client will now have the option to buy a Large image for 4 credits (Main), 17 credits (Signature), 40 (Signature+) or 75 (Vetta) credits. The price difference between the Main and Signature collection has grown from 70 per cent (17 vs 10 credits) to more than 300 per cent (17 vs 4 credits).

Along with the collection restructure, some of the icons shown in the image search had been removed already. Now most of them are gone completely. There is an indication for “exclusive” images below the image in text form and a badge for “Editor’s picks” which looks very strange because it appears on the first page of many searches that 80% of images are “hand picked”. 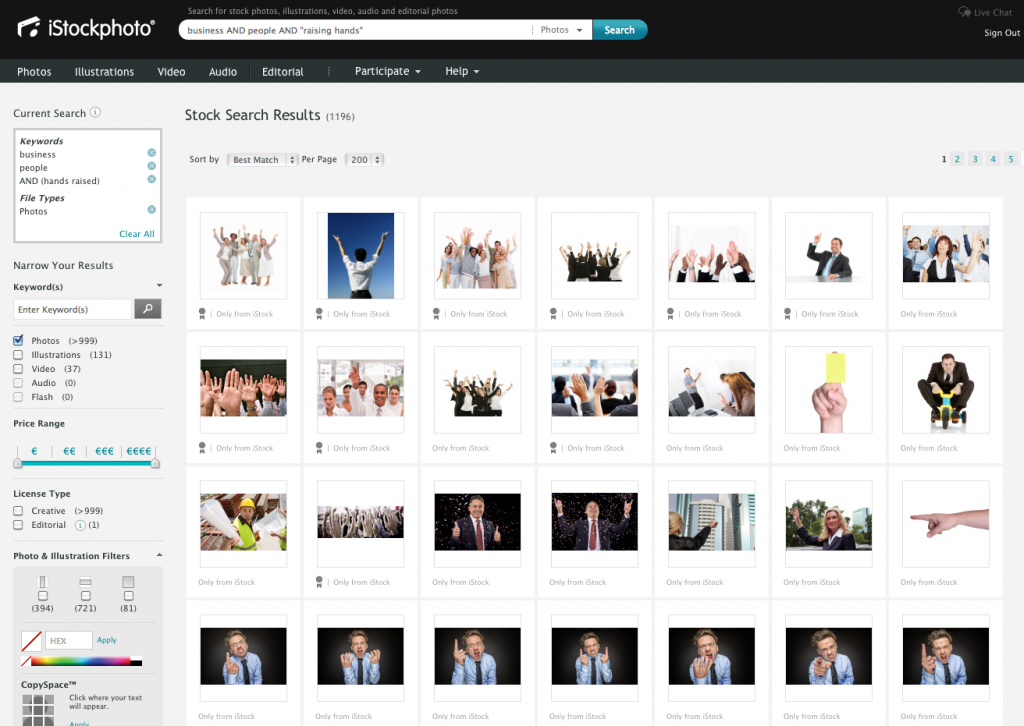 The search currently seems to favor new images a bit more than at other times in the past, so sometimes a large series of very similar images can be shown on the first page. But as this is not part of the new interface but of the Best Match algorithms, it will be subject to change regularly as it has been in the past.

The removal of all those little icons indicating exclusive images, collection, download history (“flames”), Lightbox etc. is a big step forward for the average clients. Those icons could have been helpful for regular users but for most people they were not intuitive and distracting. The focus on the actual images seems another good move.

At the bottom of the search there still is a “Display Options” feature which allows additional information to be seen in the search results. Though the options will hardly be found and is not really useful, I expect the screen shot above to be the typical result seen by clients from now on.

Overall, these changes are not going to make me feel happier about iStockphoto and certainly not consider going back exclusively. However, from a business perspective the changes are making a lot of sense. Part of them are likely to cost contributors some money on the way, though.