Over the weekend, iStock has changed its system as announced earlier this month, so the new pricing is live for everyone. The best news so far: It has worked and it is working.

We keep complaining about iStock’s technical incapabilities, and quite frankly as a former IT guy, I still don’t understand why Getty keeps running the old system. Even though, a lot of background stuff has been moved and changed, as we could see with the new Affiliate program as well as the introduction of the new subscription program earlier this year. All these changes have been made in a way to move them away from the old, instable platform that iStock still depends on. I wish they would eventually re-structure the whole system and move it to a new platform but I guess the investment and risk of such a move is still too much to ask.

However, they managed to make the changes needed within a relatively short time frame. The site went up again and seems to be running smoothly. This is a huge improvement over what we were used to see in the past very often, and actually it isn’t the first time. So this is definitely some huge achievement and we should honor iStock making progress in getting their systems under control.

How does iStock compare to the market 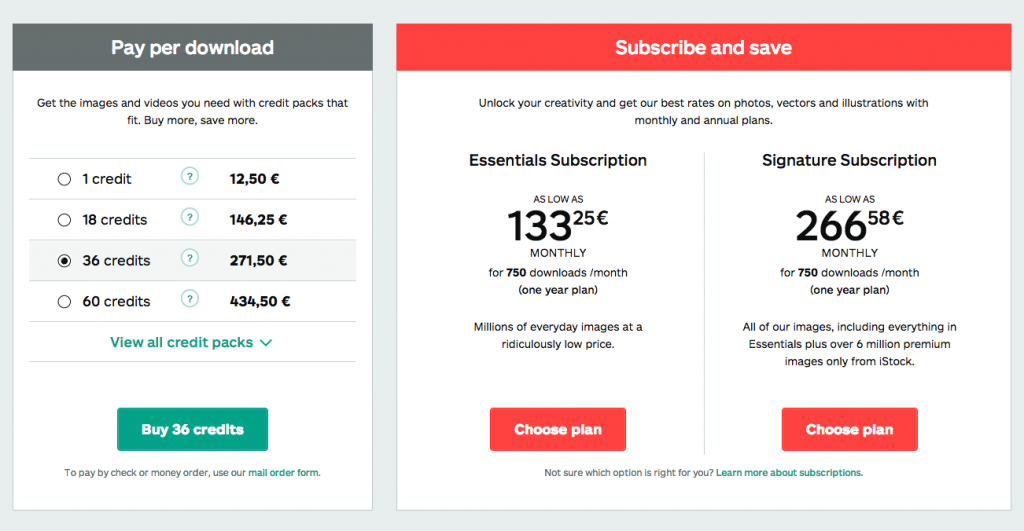 The new pricing system is clearly based on the most successful offer in the market in recent years: Shutterstock. The pricing independent of size is what Shutterstock’s main claim was – the second claim “all images” can not be matched by iStock at this time as they are having a base of exclusive contributors who need and want to be paid at higher rates than what the upcoming competitor can offer to its contributors.

In comparison to the direct rival, it is clear very quickly that iStock now has a good line to target both ends: At the low end, the minimum purchase at iStock is lower by offering the “1 credit pack” which equals exact one image. It costs $15 (or in my case €12.50) which is not quite cheap – but it is cheaper than the base price of €39 (I think $49) for the 5 image pack that Shutterstock offers. The same is true if you compare the Essentials subscription with the subscription offer by Shutterstock: The annual offer costs about €1600 at iStock which undercuts Shutterstock’s offer of €2049.

In both cases, then again, iStock does have a unique offer with its exclusive image base. For those additional images not available at the competing sites, iStock is charging a premium price. In the base packages, the premium is 200% as the exclusive images are priced at 3 credits instead of 1. This might be a bit steep on average but there is a lot of imagery among those that might justify this as a reasonable image price. 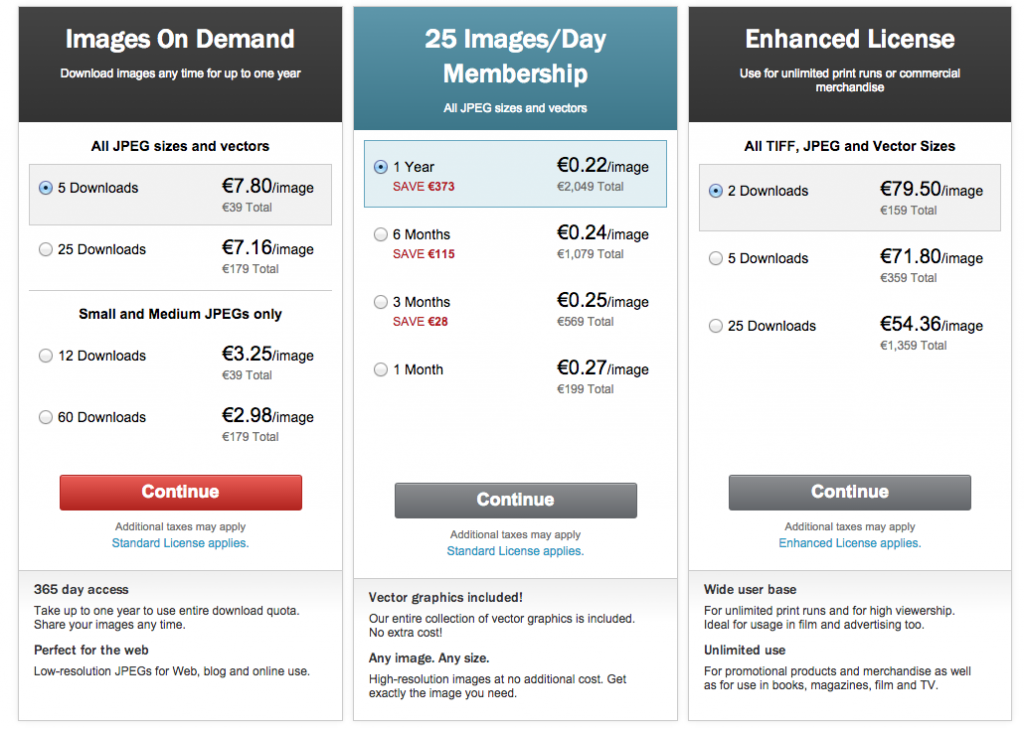 Who does iStock plan to serve with this pricing?

There has also been some critiques about the new pricing. If you are just trying to find a couple of images for a presentation you are giving, or if you need a handful of images for your new website, paying $15 per image is probably out of question. Dropping the discount on smaller sizes by making it an “all sizes, one price” offer, iStock is also dropping this type of client. At least those who are buying images with their own money.

But frankly speaking: Who cares? Or let me phrase it more professional: Do you actually believe that this type of client is the one who made a big contribution to iStock’s revenue (and as such to yours as a contributor) in the last two or three years? I don’t think so. If you build a Porsche, you are neglecting all those moms who need to do grocery shopping at the discounter and drive their kids to the soccer game. That is true but you can not make an offer that suits everyone. As a matter of fact, you will find some moms doing their grocery shopping with a Porsche. And you will still see some people use iStock images in presentations or on their websites. Because some people have enough money – or even better: They do it with their corporate’s money and not their own.

For the typical small buyers that iStock once upon a time grew up with: They are most likely gone already, for ages. For one, there have been cheaper offers in the market for quite a while. iStock had changed their pricing to the upper range of the market often enough, so those clients looking for the best deal will already have moved on. You can’t repeat that same argument again and again for five years or more, at one stage it has become obsolete.

And the second thing: There has been a lot of change outside the box that we call the “stock image market”. We are seeing millions of images being available for free. Passionate hobbyist photographers (and by “hobbyist” I mean those who don’t care about making a few dollars, not necessarily bad photographers) are putting up millions of images that you can use for many uses, with a Creative Commons license or even in the public domain. Many bloggers have already turned to this kind of imagery. With Getty Embed, iStock’s parent has already reacted to that trend, and while I still don’t like their way of not even asking the copyright holders, the basic idea behind it is right in my opinion.

I also appreciated the simplification of the collection system last year from seven to four collections as a right step. Now they even went further to two collections which significantly reduces the confusion for buyers further. I do believe that this way of simplifying the buying experience is a positive step. With the new buying system, they have taken another big step in the same direction, and I believe what they are doing is indeed the right thing to do.

What iStock still needs to do (in my opinion)

Overall, I think all the changes made in the last 18 months at iStock were hard to take for many contributors but are directed in the right way. In a free economy, offers need to be made in a way that suit the buyer’s needs – not based on how things were in the past nor on how much it cost to produce a product. If your product is priced based on your cost, and that cost is too high, you will fail in a market that supplies a similar substitute product at a lower price. It’s just simple as that, and iStock has ignored this fact for too long, and exclusive contributors have to take a certain amount of blame by trying to push their earnings to new regions that are just not warranted for many of the images they supply.

However, this is still one of the big issues that I keep criticizing: The fact that “exclusive images” are priced higher by the pure illusion that this exclusivity has any means to the customer. The customer (at least the majority of them) does not care if an image is exclusive at a certain agency. This has been proven by Shutterstock over the last few years by gaining market share. But it had already been proven by Getty Images themselves who are sourcing a lot of images from outside sources and just distribute the same imagery that also is available at other places. It just doesn’t matter. It’s about serving a purpose for the customer.

For that purpose, it doesn’t matter if the image is being produced by someone distributing his images across multiple agencies or just exclusive at one place. The only images that warrant a higher price are those filling a need that non of the other images can. There is a certain range of imagery at iStock that would indeed warrant a higher licensing price in my opinion. Initially the Vetta collection was a great example of that kind of imagery. Also, parts of The Agency Collection certainly matched those criteria. But a huge part of the exclusive image base is just another take on the same kind of images, concepts, content that many other non-exclusive images also target. The customer need isn’t different because your particular image is only available at one place.

So there will be a need to restructure the content according to the potential customer value rather than the pure status of exclusivity. As long as that does not happen, a huge problem in perception will remain when the customer opens one image of an apple to see it costs $15 and a very similar image costs $45 for no obvious reason. If iStock wants to improve the buyer experience, this is the part that is still missing.