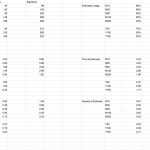 Getty has sent out an announcement today with details about the long awaited change in their royalty system. The new system is to replace the Redeemed Credit (RC) system which was introduced five years ago to reduce the growing percentage of royalties paid to contributors but became unusable for many years now since the introduction of a flat rate per image independent of size and the image subscriptions. Today, roughly 80% of downloads on iStock are coming from subscription customers. The new system is supposed to be more transparent but blatantly fails to be just that. It adds complexity, it adds confusion, it adds intransparency. And it ends up in a pay cut for a large number of users.

The new royalty rate for credit sales for all non-exclusive contributors will be cut to the minimum of 15%. While this might look like a meager 2 or 3% less than you have earned in the past (if you were lucky enough to have reached a level higher than 15%), it actually is a steeper cut:

A drop from 16% to 15% effectively means getting 6 per cent lower royalties. A drop from 17% means a cut by 12 per cent of your past earnings, and if you have reached the 19% level, your new payments will be more than 20 per cent lower.

The partner program/Thinkstock downloads will not be changed from their current system either. At least not for the time being. But since Getty is continuing their projects to reduce complexity and unify their systems, I assume it is only a matter of time until Thinkstock will be closed and customers moved over to iStock. Since iStock now also offers the industry standard monthly subscriptions for a few years, there is no real need to keep Thinkstock alive in the long term.

Two of the goals mentioned in the newsletter are “reducing complexity, increasing transparency“. The new system completely fails to achieve both of these goals. With the new system, contributors no longer will receive a flat payment per subscription download as they used to (and as it is common in the industry) but a percentage cut based on the package a image user has bought and the amount of images downloaded by that customer.

iStock currently offers five different monthly plans and three different annual plans, each available in two versions for Essential (non-exclusive) files only and Signature (exclusive) files included. That’s a total of 16 different subscription plans. And on each of those plans, the number of images used by any given buyer will vary. In other words: Every single download in the future will have a unique royalty payment, and there is no way to find out how the number is being calculated.

To reduce the size and complexity of this article, I have published a separate blog post explaining why the thought “all subscription users are using up all their allowed downloads” is not supported by logic or known facts. I have used the calculations from that blog post plus a wild guess about the usage of smaller packages to come up with potential royalty payments in the coming year. Here is what my spread sheet looks like: 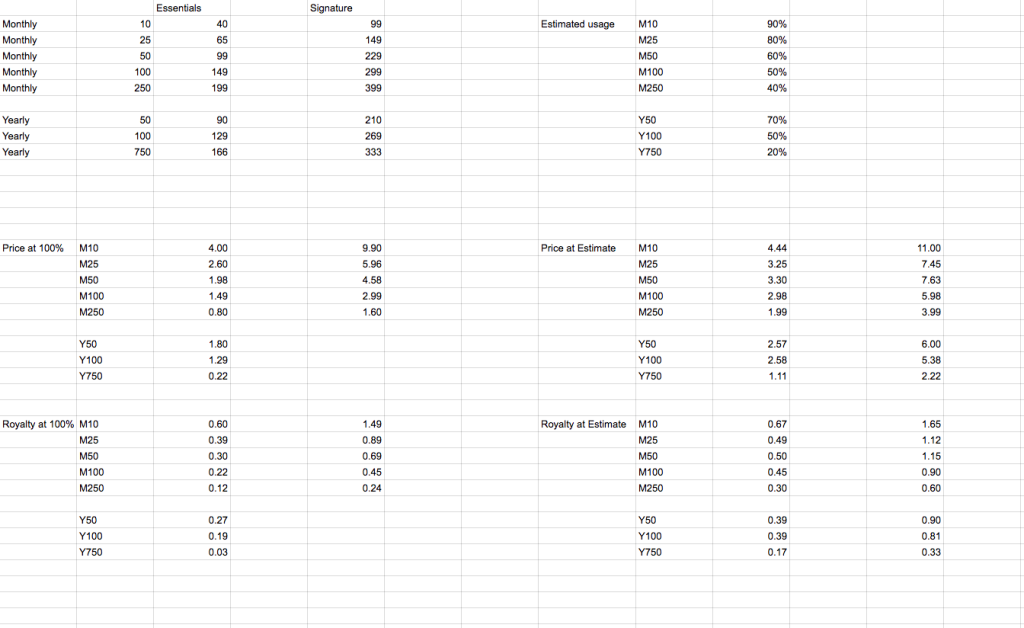 On the top left, I have listed the different subscription packages available with their monthly prices. Below that on the left half I have calculated the “worst case scenario”, what the average price per file and the resulting royalties for non-exclusive contributors at 15% would mean.

On the right half of that spread sheet, I have made an estimate (no, a guess) of what percentage of images each subscription purchaser is likely to be using each month. Let’s call it intuition or my personal logic. Based on those guesstimates, I have again calculated the price per file numbers and the resulting royalties for each of those subscriptions.

The good news: There is only one scenario where I ended up with payments close to the ridiculous 2 cents “guaranteed minimum” Getty is mentioning in their newsletter. If a subscriber would actually use up all of their 750 downloads in any given month, the price per file would be 22 cents and our royalty reach the low of 3 cents.

The bad news: The subscription package that directly competes with Shutterstock’s main offer of 750 monthly downloads is going to pay a meager 17 cents per download if the customer is using just the average 20% I am estimating. That is the direct comparison to the 25 cents each newbie is earning on Shutterstock for the same package by the same customer; and the 38 cents most advanced users will make on Shutterstock.

The final result will be different and most likely average more than these 17 cents, though. For customers with 50 or 100 downloads a month, my estimate was that they are likely to use up far more of their monthly allowance, about 70 and 50 per cent (these numbers have zero foundation as I wouldn’t know where to draw sample numbers from). In those cases we would make 39 cents on average. In other of my scenarios, the potential payment could reach $1,65 for a download (if a 10 downloads/month subscriber uses 90% of their Signature collection), though I don’t see many cases like this happen.

All in all, we know that Shutterstock pays roughly 30% of their revenues to contributors, at least for most of the downloads, those generated by the users on their highest level. And I just have to assume that the 15% Getty/iStock are offering to their non-exclusive contributors now will end up with about half of the average royalty made on Shutterstock. Therefore, my assumption is that the average download will pay around $0,40 on iStock next year, and that already includes the credit sales which are only making up 20% of the downloads these days.

For exclusives, the RC system will be replaced… by a new RC system

While the “simplification” for non-exclusives apparently is to reduce everyone to the lowest paying levels, the future for exclusives still is partly in the dark. The RC system, introduced many years back but never actually used since, will finally be replaced. By a new system with a different name and the slight difference that from 2017 not the “credits” are being counted but the number of downloads. The RC system has become more and more useless as it was introduced at a time when a large image in the Vetta collection cost 100 credits. Today the same image can be bought for 3 credits as all sizes have been removed from the pricing mechanisms. Even more, all subscription downloads are not using credits at all and with the introduction of smaller subscription packages more and more users were moved out of the credit system.

So in the future, contributors will be paid by the annual number of downloads their portfolios accumulate. The levels are likely to stay similar to the current ones, with 25% as the minimum share and 45% at the top for a chosen few. The effective numbers have not been published yet, so there is no way to know at this time where you will end up in the new system. It is unlikely however that many people will profit from the new system by getting to a higher level than today. The only people affected this way would likely be new exclusives who never made it above the 25% in the existing system but grew their portfolios to generate enough downloads to reach the 30% level.

All in all, the news announced today is all but transparent or reducing complexity. In fact, it contains far more uncertainty than the system we have known for the past five years. Then again, the announcement also mentioned that Getty will pay “one million dollar more in royalties” based on the new system. But frankly, for a company having made $300 millions in annual revenue a few years back (we don’t know the current numbers but it is likely to be lower), one million is not a huge amount. Actually it is most likely not close to compensating for the reduced payments made in the past years with what the RC system has turned into.