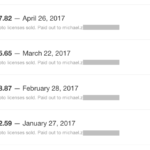 I have been writing this blog for four years, I have mentioned EyeEm a lot of times but so far I did not have a single article dedicated to them. That’s something totally uncalled for since they turned out to be one of the places that make good money for me month after month. In the first four months of 2017 alone, the royalties I received through them added up to $1,254.93 and I actually have some hopes this will continue to improve. 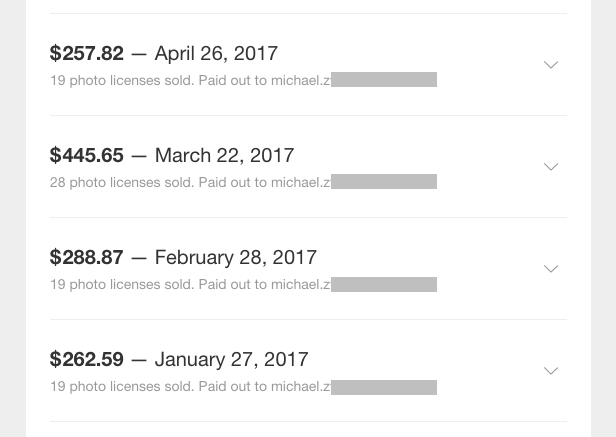 The royalties I have made with #EyeEmPaid in 2017

For those who stumbled across this post and don’t know me yet: I have been doing stock photography for more than a decade, for the first half as a hobby on the side of office jobs, and for the last couple of years as a major part of my photography business. So I’m not new, trying around, I pretty much know what I’m doing. This certainly helps me thinking ahead as I already know all the pitfalls of trying to shoot for stock. I have been running this blog since early in 2013, written over 100 blog posts on the stock photography business and the places to sell and regularly keep posting little hints and news on my Facebook page. And I even wrote a book on stock photography which is available in German language at the dpunkt Verlag or any book seller.

Logos are the biggest issue as there are plenty of them around us all the time. The little Nike swoosh on the shoes or even worse adidas’ three stripes along the pants, the RayBan logo on the sun glasses, the Apple logo on the iPhone or the Mercedes star in the city scape. Many of those can be fixed in post processing using tools like Snapseed of Photoshop Fix on the phone or editing software like Lightroom or Photoshop on the computer. However, it is so much easier when you already know what to look for while shooting. Sometimes a slight change of angle will already hide that small logo that was visible a second ago. Train your eye to look out for them and you’re half the way of getting more images approved for commercial use.

Design products are a bit more difficult: Apple, Samsung, Google have all sued each other for many years, fighting for their products to stay unique enough to give them an advantage. In the same way, they don’t like to see the most important protected elements of their designs in stock images as well. Using an iPhone as a prop in a stock image requires you to not only hide the Apple logo on the back but most of the unique physical features like the Home button and the antenna strip on the back. For modern cars, the same is true: Even just the head lights or the silhouette of a car can give away the brand and needs to be avoided if possible. Try to read up and learn quickly what can be done and what is a strict no-go if you want to make more from shooting images. (Read more about retouching images for logos on EyeEm’s blog: https://www.eyeem.com/blog/photo-editing-for-eyeem-market-101/)

I also want to mention the importance of being focused on uploading better images rather than more images. Volume certainly helps in increasing sales but if you upload another 10,000 random images of flowers on a meadow in spring time, you are rather unlikely to make significant amounts of royalties. Being selective in what you shoot, how you shoot, how you select the best of them and how you post process your images.

If you are looking for the right tools, I have written a blog post on the 8 apps I use most often on my phone on MyStockPhoto a few years ago: https://www.mystockphoto.org/8-apps-mobile-photography/ – with the exception of Hipstamatic (too destructive for stock images) I still use most of them, Snapseed and VSCO Cam still being my favorites.

After three years of uploading to EyeEm, I have managed to get around 1,000 images into the Market so far. That isn’t a big number, and there are others who have ten times more. But from what I have seen in numbers shared, I believe that I have a rather high hit-miss ratio and certainly make more than some of those who basically upload the whole set of images from their camera. I prefer to spend a few minutes on every image to optimize the contrast, the colors, if needed I crop for a better composition. I also try to add at least ten relevant tags (albums) to each of my images, even though EyeEm uses image recognition to add tags themselves. The most relevant ones (where I have been, what exactly it is that I have shot and how I shot it) are regularly missed. I am convinced: Spending more time on less images gives my images a certain advantage over those who are less selective in what they upload.

Once every year I make the effort to get up extra early around 4am, take the first train down town to the center of the city and be among the few first ones around. Being able to picture places that are crowded in most of the images other people upload gives my photos an edge that others can’t provide.

Find that extra mile that you can go to make your images stand out from all the similar from the same locations.

Beyond the beauty shots

When it comes to shooting people, there are basically two kinds of photographers: Those who don’t dare to take images of people at all, and those who primarily shoot female subjects in the range of 18-30 years. Well, at least that’s what 98% of images on the internet suggest. I won’t try to talk you out of that, if you can get model released images with a young woman in beautiful places, you’re likely to still sell images.

However, thinking outside of that box of people that are seen all the time might also work well. Luckily, I have a very willing and cheap model working for me voluntarily all the time: Me. And since I don’t have any jobs that require representation, I can allow myself to grow my beard a bit longer than usual every couple of months, have my hair grow a bit longer, get dressed however I like and much more. Add some light that goes beyond the all-flat-no-shadows-softbox light in common microstock photography, and you might have a unique image of a person. Even a character sometimes.

Show something common in an uncommon way

Food photography is among the most popular themes in recent years, so many blogs around that topic and lots of people shoot their own beautiful images of any kind of food. It isn’t impossible to stand out of the crowd if you are really good at what you do. However, if you are more like me, you’ll never manage to get “above average” food images. I try to compensate by shooting unexpected images in themes where I can’t compete with the best. You can spend lots of time to prepare and arrange your food – but what food photographer takes an image of the plate after dinner is finished?

Full disclosure: I do contract work for EyeEm. However, I am not getting paid for promoting their market nor do I get any benefits (like my images being sold more prominently) in exchange for writing this blog post. This post is just describing how I feel about their offer as a photographer in this business.

Want to learn more about EyeEm and selling images?

We have started a Facebook group about the EyeEm Market earlier this year. Feel free to join the discussion.

Also, I am sharing news and opinions on the different ways to make money from images on my Facebook page.