iStockphoto has put more emphasis on its “exclusive” images coming “Only from iStock” recently. Apparently this comes as a reaction to the founding of Stocksy United, a photographer owned agency which also represents quite a few of those artists that formerly were part of iStockphoto’s success – let me just mention Sean Locke, Kevin Russ, Tyler Stalman, Stephen Morris, Cameron Whitman, Wolfgang Lienbacher. The emphasis on Stocksy is on image exclusivity of some of the most creative people in the industry.

Apparently iStock – especially with its former exclusive and artistic “Vetta” collection – felt the need to counter this with a stronger emphasis on their “exclusive” imagery. Or at least what they call “exclusive” these days. Just let me have short look at what potential buyers might think exclusivity means, and compare this to the way iStock’s interpretation of the word.

If you are a buyer, you might want to consider where you purchase your images: iStockphoto claims to have a lot of content “only from iStock” which might lead you to think you will get some extra value for your money. As a matter of fact you should re-consider: Is it really worth paying 3500% more for an image of an apple isolated on white because it is “only from iStock”?

Two apples, isolated on white background… one of them “Only from iStock” and an “Editor’s Pick”

As you can see from the sample above, the image “only from iStock” costs $36 in the “Small” size while you get a similar resolution of a different apple for just $1 at GL Stock Images. So what is the advantage of having the first image? Well, okay, it is an “Editor’s Pick”, so it must be worth a few thousand per cent more than the other, right?

Microstock was successful with buyers because of the low prices. It would not have been a success if it did not pay off for photographers as well. This only worked out because the images were used over and over again, so those little dollar prices summed up to an amount people could make a living from.

Well, iStockphoto has been the market leader in microstock since the start. No surprise that most of the microstock images ever used were supplied by iStockphoto. Years ago, I started to set up a lightbox with the most successful images every at iStock. All images in that lightbox had 2,000 downloads or more. The top selling images had 24,000 paid downloads! 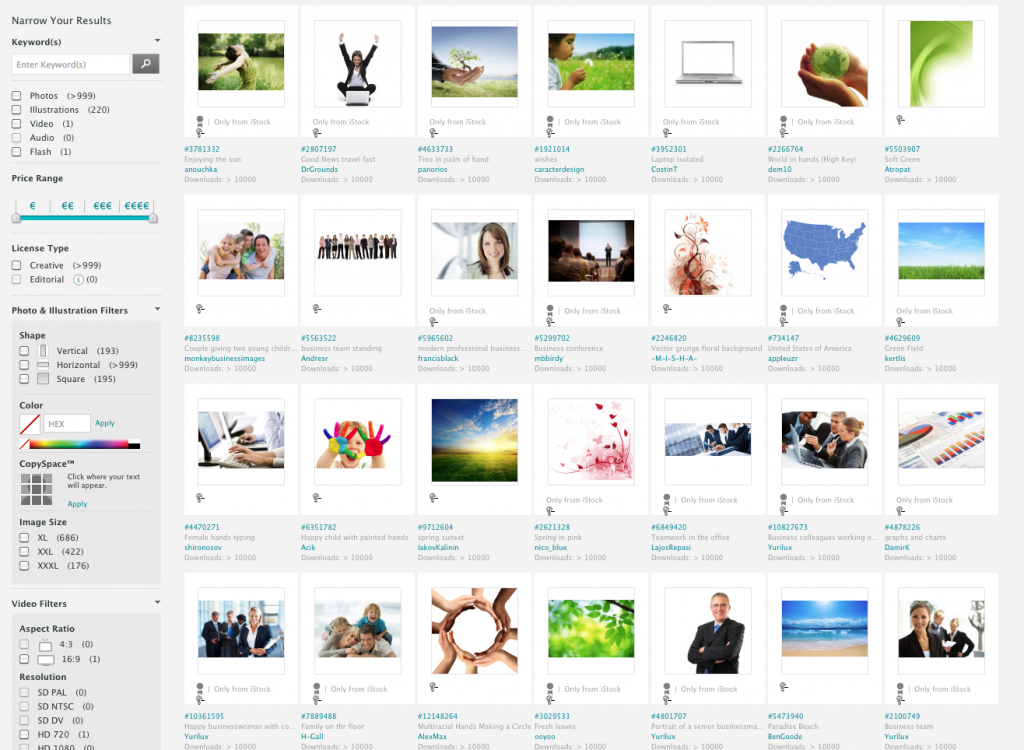 Page full of images with more than 10,000 downloads each

By the way, 1200 out of the 1450 images contained in that lightbox are “Only from iStock”. And another remark: Any image now being shown as “Only from iStock” does not guarantee it has been available just there from the start. Just recently, microstock jack-of-all-trades Yuri Arcurs has announced to take his images exclusive with iStock/Getty. His images are now available at iStock only but they have been sold millions of times through other agencies in the past. This includes those image freshly uploaded and showing 0 downloads on iStock right now. Most of those images have a history of being distributed across dozens of agencies to millions of clients each year.

Exclusive images are available on iStockphoto only

Explanation of “Only from iStock” on the iStockphoto website

Not really, at least there is a little detail that needs to be remembered: The fine print on the iStock website mentions “can only be found on iStockphoto and select Getty Images partner sites” as the key to exclusive images.

Now what needs to be questioned is how long the list of those select partner sites are: First of all, for the value images – even those marked as “Only from iStock” – you have to remember that many of them will be available on Thinkstockphotos and photos.com as the partner program sites of iStockphoto. There is a certain number of images that can not be found but others can be bought at those sites.

More importantly: The “high value” images on iStockphoto can also be found on Getty Images itself. This might include agencies around the globe which distribute Getty’s images as “Master Delegates” in their home territories. Along with Getty themselves distributing the images directly in most industrial countries.

And even more: Part of the “new, better Vetta collection” are tens of thousands of images that were sold for years by other agencies who partnered up with Getty. Those images can not only be found on Getty and its delegates but in many cases also on the partner agencies themselves.

Okay, fine, those images are usually more expensive on the other agencies, so they look like a bargain on iStockphoto. And in many cases they are. But this is also part of the truth: If you don’t want to find out that you have spent a few hundred dollars on an image that can be bought for $50 somewhere else, you have to look around the whole family of Getty services.

What does exclusivity mean actually?

Well, in the case of iStockphoto, not much more than a marketing claim. Probably more than half of exclusive images can be found on multiple agencies around the world. And especially the high value “Vetta” collection is not even sourced from iStock but in many cases from outside agencies.

There are still a lot of wonderful and unique images to be found on iStockphoto. But they are the exception even among those called “Editor’s Pick” (which is another story as it does actually mean “this is one of the more expensive images” rather than someone manually picked these images).