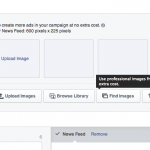 In August 2013, Shutterstock announced a cooperation with Facebook, allowing advertising customers to use Shutterstock images in their Facebook ads. I wanted to see what is behind this and how it works – both for the client and us contributors.

So I started publishing an add for my own Facebook page.

After adding one of my own pictures, the interface indicated very quickly and visible that I could use “professional images from Shutterstock” in my ad. This looked very promising, I didn’t have to search for the feature.

I started looking for images that might be right for my new campaign. As I didn’t really have big plans, I decided to use some terms that would bring up one of my own images. 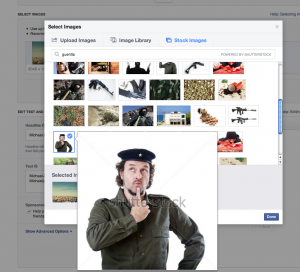 Searching for an image and adding it to my Facebook ad

Searching and adding the image to my new Facebook ad was simple and straight forward. Also – surprisingly to me – I did not get charged for the image as an ad client. Apparently Facebook is covering the cost out of the fees they charge me for running the ad. But there was no indication that this ad would be more expensive than if I had run it without adding Shutterstock images.

Then again, the ad itself isn’t quite cheap to run. In my case it was just an investment to write up this article. But the cost of the images for Facebook probably were well below 20% of the advertising cost for me, and I really tried to keep it small. So they can easily afford it while it makes creating a new attractive ad so much easier for their client.

The downloads show as SODs at subscription rate of $0.33

The subscription rate can be argued this way: Facebook is acting as the subscription client like a design agency, buying an image on behalf of its end user. This is probably what many designers are doing as well. Facebook does not keep the rights to use the images (as can be seen from getting multiple downloads on the same images through the program) nor does the client get to keep a usable copy for anything else. Also the image resolution used is tiny – not even half the size you would otherwise buy as a XS file at other agencies.

All in all I think this program is really well done and a good example how a cooperation can actually help every party involved.