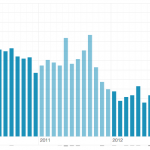 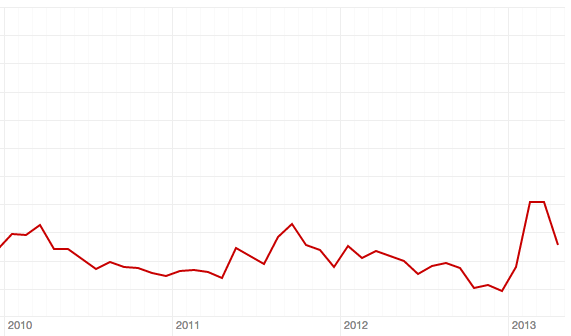 Downloads for half of April indicate growth of 25% over March (Note: Jan/Feb incl. iStock PP, Mar/Apr not)

In April, my downloads seem to skyrocket. The addition of new images to my portfolios, additional agencies, and obviously the season between Easter and the summer break added up to a strong growth in image downloads. The royalties are a little behind with more small and sub sales but still they are growing well. My target is to beat last year’s royalties in June for the first time and I’m on track to that.

But now I am questioning myself what the best way of comparing between exclusive sales in the past and independent sales in the present: The most simple way is just to look at the monthly spread sheet, compare how much money is coming in and compare it to what came in last year at the same time.

Then again, I have seen significant drops in my royalties between 2010 and 2012. Based on those trends, I would have to assume that the drop would continue in 2013 and to make a fair comparison, I’d need to account for about 20 or 25 per cent less than I had made before. This could have likely been my royalties this year had I stayed exclusively. If that was the case, I would be better off already because that’s what I’m at right now – but with a positive trend this year. 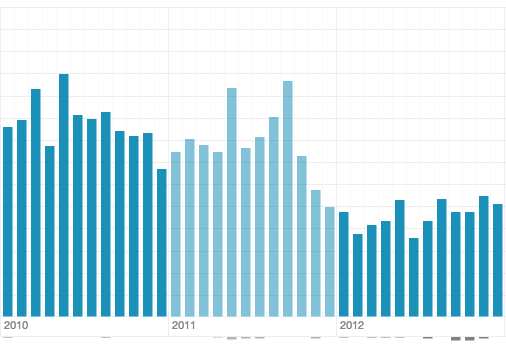 On the other hand, I am adding new images to my portfolio that never made it to an agency before. Some of it started selling pretty consistently on several agencies, so it might have made me more money at higher prices if I was still an exclusive contributor. I somehow doubt that because those images are the “typical microstock images” that iStock seems to have grown out of. They are getting good sales at low prices and subscriptions but probably people would not have paid $20 for a large resolution of these.

Also, I will soon reach a point when my total portfolio will be much larger than ever. Is it still fair to say “now I’m better off than before” just because more images are likely to get more sales? People suggest to account for “Return per Image” (RPI) which just means “how much money do I make divided by the images I have in my portfolio”. Yes, that can be a good number to compare because it gives an indication how much can be earned in the future if x images will be added. However, it’s not the total truth because a) it can be easily manipulated by deleting images that don’t sell well; b) it does not account for the age of your portfolio as older images might lose sales over time. If I had 1,000 images uploaded over the course of 5 years, 600 of them are older than two years now and far less likely to gather new sales than a portfolio of 1,000 images uploaded within the last six months.

Well, I don’t have a perfect solution. There never will be an honest answer to the “what if” questions as we can’t go down two roads at the same time. How would I be off now financially if I was still an iStock exclusive contributor? I will never find out. I just know that I am very optimistic to return to a path of growth in royalties very soon; I am very confident that I will make more money from image licenses in 2014 than what I made in 2012. With some luck it could even happen this year already. My goal is still to eventually reach new record months, and I have returned to a positive attitude towards that goal which I had lost in the past two years.

In the end, all that counts is the amount of money arriving on my bank account. “What if” won’t pay the bills.