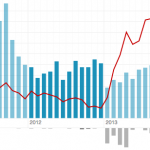 Exactly one year ago I started this blog with the very first post about going non-exclusive or independent or however you want to call it. In more than 70 posts since then you could read about how my income had dropped and recovered, which major changes happened and what I read into those changes. 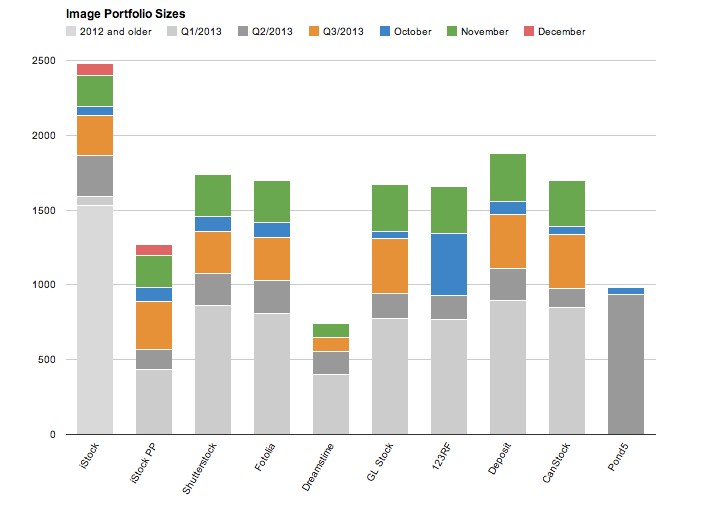 Before I started distributing my images across different platforms, I had about 1,700 images in my portfolio at iStockphoto exclusively. Today, I am close to reaching 2,500 images at iStockphoto – having removed about 200 of the images I had up there before going non-exclusive that means I have added about 1,000 new images to my portfolio last year.

At all other microstock agencies, I am about to reach 2,000 files in my portfolio pretty soon. There are still a few hundred images exclusive with iStockphoto as some images can not be uploaded anywhere else – files that were shot on minilypses or iStockalypses have to stay exclusively with iStock. And for some files it was just not worth my time going through them again and keyword them freshly.

What is not included in these numbers are the portfolios in the midstock and macrostock price ranges I have – for one, I have almost 100 images online at Stocksy United today, and with the recent innovation of the SMART Collection, I was able to quickly grow my portfolio at German macrostock agency Westend61 to almost 200 images now.

There seems to be agreement in the market that about 2,000 images per year is the production level you can reach as a standalone stock photographer fully focusing on this business and without having a crew of hired employees. I am quite a bit short of this number but I had other duties (family and business), so I could not dedicate 100% of my time to stock photography yet. Also, this was the first year for me doing this, so I had to get up to speed, learn how to shoot and process quicker and better. I think this is going to continue and help me make progress in my second year now. 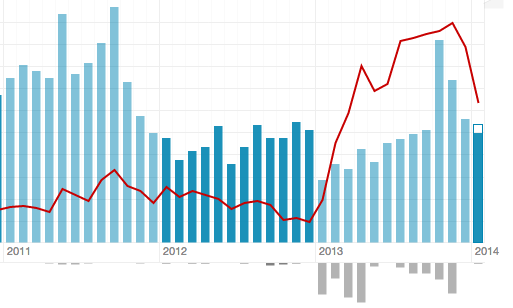 As I had reported from the very start, I expected a drop in royalties to happen after going independent from my iStock exclusivity. The drop was about a cut in half from my prior royalties and came quickly. But it settled very quickly as well. I have to note – as can be seen from the chart above – I already had a severe drop in royalties in my last year as an iStock exclusive contributor by about half from my prior levels I had seen throughout 2008 to 2010.

However, I was positively surprise to see how quickly I was able to recover from this early drop: April 2013 was the first month when I beat the income I had made the year before and from June on this was alway the case. There still is a flaw in the stats as iStock apparently had miscalculated the partner program royalties in October, so I expect to lose around $200 from that month. Still, October and November are far ahead of what I had earned from my images a year before.

With December being extremely slow in sales for me personally, I am now settling back to a base line of sales. January however has been kicking off the new year very well with probably doubling the last year’s January royalties and beating the 2012 earnings even before adding the partner program sales to come.

Which agencies provide most to my income these days 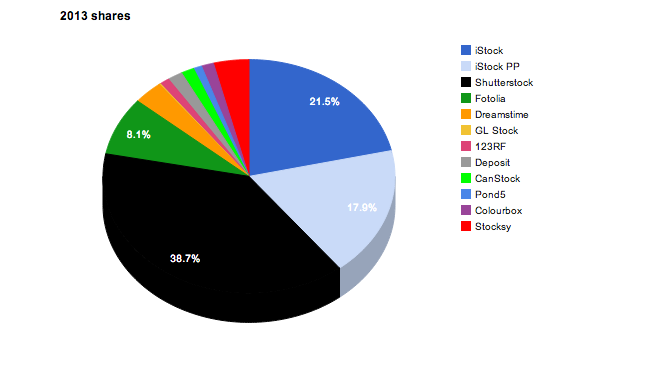 Distribution of royalties by agency in 2013

Not unexpectedly, iStockphoto and its partner program combined have been still my number 1 earner for the past year. This is going to change in 2014 as it was only based on the fact that iStock had all my images but it took me a while to re-keyword and upload those images to other agencies. Shutterstock has been consistently leading my list of agencies for the second half of 2013 and it will continue to lead this year.

Both, Shutterstock and iStockphoto combined, provided three quarters of the royalties I have earned last year. Fotolia and Dreamstime are coming in after the top two. I was surprised that Depositphotos was picking up sales regulary while 123RF took its time and especially the large portion of subscription sales (on both sites) have kept them from a better placement.

It was surprising to see that Stocksy United already provided 5% of my royalties througout 2013. Given that about 5% of my portfolio is exclusive with Stocksy, this is about a “fair” share in my earnings. But Stocksy only started end of March and is in its first year of business, so it could have expected to grow slower. Overall, Stocksy had a very successful start and looks promising for the future.

With my other new venture at Westend61, it takes a long lead time to see any results: Westend61 is specialised in distributing images through partner agencies which can take a few months from keywording to exporting those images until they are accepted at the partner sites. Then the flow of sales is coming back over the course of the next months and years. So this is more about 2015 and beyond rather than the expectation to make a quick impact to my totals.

Tomorrow I will post my thoughts and plans for my second year. My plans and thoughts, how I expect the market will develop and how I hope to finally make a living from my images. Stay tuned.

Update: Here is the follow up with my outlook to the second year.