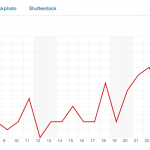 My first end of a month as an independent will be the start for regular reports and stats. Obviously this month is not a full month as an independent yet – for the first 20 days, I was still an exclusive at iStockphoto, at the end of the month I have only one third of my images up at other agencies, the move of my files to Thinkstock has just started and I still have 150 images up at Getty Images through Vetta and E+.

So let’s have a look at my portfolio sizes first: 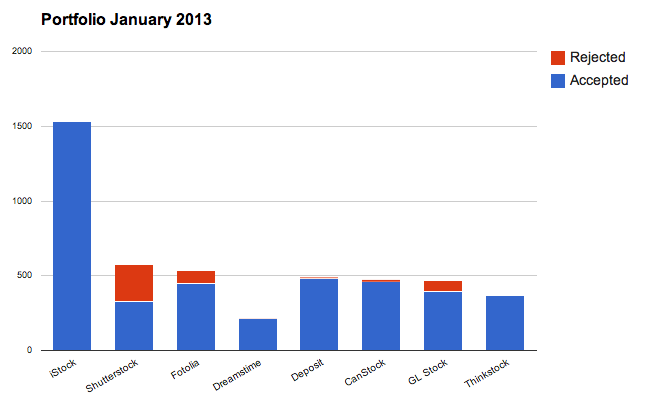 Size of portfolios on diffeferent agencies

I have uploaded more or less the same content to six different agencies. There is one exception: Dreamstime, for two reasons – Dreamstime is the only agency with an upload limit which is 140/week at the start; the upload limit stays that high unless your acceptance rate drops below 80%, so I was trying to first figure out their review before risking to drop below that. I was also made aware that they are editing quite tight if it comes to similar images, so I reduced my uploads to mostly 2-3 of the same series. At the end, I uploaded 214 images in the first two weeks. I wanted to use my slots if possible but also was keen to get some feedback before uploading too many, and the reviews took almost two weeks at the start. The end result was positive, only 1 file was rejected.

Across all agencies, the upload process was very easy and straight forward. Having had my images prepared on my computer, I could upload them through FTP and then finalize them on the different agencies. What has to be done is more or less the same everywhere: Choose among the categories (which is a different system in each agency), connect the image to model releases if required, check if title, description and keywords match each agency’s requirements. It is hard to compare to what you are so used to if you only uploaded at iStock for six years – without DeepMeta the comparison would be easy because iStock is by far the most complicated system to use as your keywords have to match their Controlled Vocabulary, and there is no mass uploading system. DeepMeta helps making this easier but still all other agencies are much easier to use.

The system of GL Stock Images is the easiest to use as you don’t need to connect model releases to images – you have to upload them into your pool of MRs but the matching will be done if needed by the editors. This takes a step off the upload process. Of the big sellers, the system at Shutterstock was the easiest to use in my opinion. The interface is clean and modern, easy to understand, allows for changes to multiple images etc.

The upload process of Dreamstime and Fotolia is a bit more complicated. Fotolia allows work on multiple images but they have a category system with three tiers (which can be prepared for, I will show how in a later post), and they ask to sort keywords in order of relevance. This is a smart idea from the customer point of view to have e.g. five specific and relevant keywords on top and others (like age ranges of models, composition keywords etc.) as complementary at the end. Dreamstime is easier for each single image but they – at least I didn’t figure it out – don’t allow work on multiple images at once. You can however copy content from prior submissions.

Deposit and CanStock could make an update to their UI eventually but they are pretty easy to submit images. Overall, I think there would not have been a problem to get thousands of images up within a month across all agencies.

Acceptance rate has been very different but in most cases in the high 90’s. Obviously I have only uploaded images that already went through iStock’s inspection process. Though some of them are five years old and not on top of my own technical skills, and I guess some images were accepted just because I was exclusive at iStock, so in border line decisions I assume inspectors are also saying “he can’t upload it anywhere else, so we’ll accept it”. So I was expecting a certain amount of rejections.

Though we all know iStock is tough in its inspections, at least in some aspects like trademark/IP considerations, Shutterstock might even be a bit tougher. Also there are probably different main aspects they are looking at, e.g. I received quite some rejections for “focus issues” for images where I chose a shallow DOF knowing that iStock doesn’t have a problem with. I might have to adapt a few things for future shoots. The high amount of rejections in the graph above is mainly caused by me submitting German model releases for some older images – I had informed them about it beforehand, and they agreed to accept them, unfortunately that information didn’t reach the reviewer in time. I will be allowed to re-upload them and they should be accepted then (unless for technical reasons, of course). This amounts for about half of the red part of the bar. In addition, I have a series of images which also had confused iStock inspectors at the time of uploads for trademark reasons. I had those reviewed in depth by the Getty legal time to get them through. I am quite positive to get those through as well at Shutterstock. With those two groups, my acceptance should rise well into the range of 80-90%, and I am quite sure future shoots will be accepted for 90% and more.

Fotolia also rejected more than 10% of my images but there were not many surprises. I am totally fine with each agency setting their own standards and rejecting things that others accept.

Not surprising, the number of downloads is rising since I went non-exclusive at iStock. While the number of downloads is about the same at iStockphoto (32 in the two last business weeks, 31 in the two business weeks before), the downloads on all other agencies come on top, with Shutterstock alone adding 63 downloads. To be honest, this alone feels rewarding, even though the royalties are much lower.

StockPerformer only works with the five largest agencies so far, so the stats above are missing six downloads I had on Depositphotos and one on GL Stock.

As can be seen, the amount of royalties has dropped significantly from the first two weeks. The amount of royalties lost on iStock is about 70%, from $140 in the first two weeks to $40 in the last two. But the development on iStock in the first half of January has already indicated that I was on the best way to a new looooow. If I add the $100 I have lost due to non-exclusivity, I would have made roughly $350 on iStock as a non-exclusive – 30% down on December, 15% lower than January 2012. And less than half of what I had made in the Januaries of 2009, 2010 and 2011 with about half of today’s portfolio size.

In exchange, the new agencies have made about $30 only so far. But for most part of the last two weeks, I only had half of the images online on Shutterstock and none on Fotolia & Dreamstime. And in all cases I only have about 20-30% of the files online that are in my iStock portfolio. So it will be interesting to see the development in February.

The first month of starting something new is always exciting. Though it has been a lot of (unpleasant) work to go through old files, getting them ready with keywords and metadata, uploading them six times. The early development on the new agencies looks actually quite nice, positive customer feedback with getting sales was coming in quickly. And almost immediately I made back about 30% of what I have lost in iStock royalties. We will have to see how consistent the files keep selling or if some agencies might just favor “new” stuff and lose out in the long run. Or if it takes some time to get found often enough by buyers to actually get the downloads started on a regular basis.