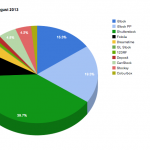 It’s been quiet in this blog for a while. I have dedicated my time to processing lots of images and some other ventures, so I can’t spend as much time with the blog as I would love to. At the moment this blog is just a hobby that does not pay back even for one hour of my time. Frankly, I could need some of you to click on the referral links on the right side to sign up with those agencies.  😉 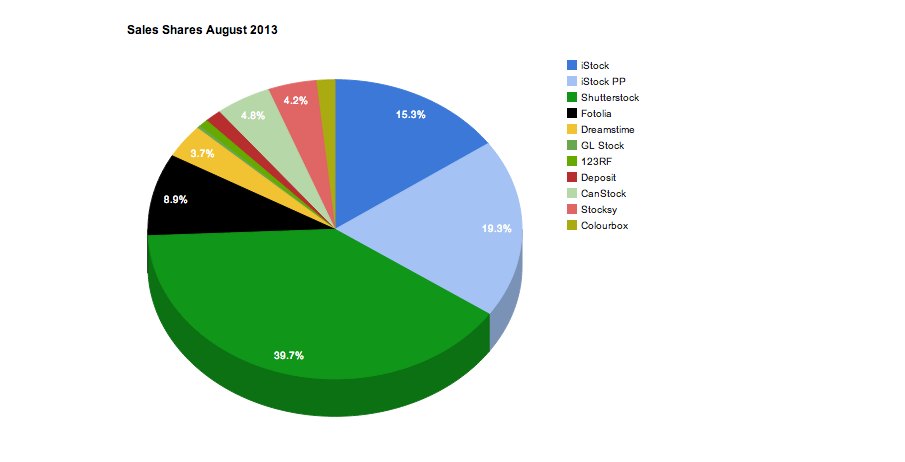 The distribution of royalties in August did not change much from the months before: Shutterstock has taken over the lead in royalties with iStock and the Partner Program combined in second place. The partner program is providing more royalties than iStock itself now, and with 50% more images added in August and September I expect the difference to grow.

A special highlight in August were the first sales on Stocksy United. I have waited for it to happen eventually, and then I had three sales within a short time frame. Only three sales but more than $20 in royalties, and that is with less than 70 images online so far. With another sale in September, things are looking up for Stocksy at the moment.

Another special event was a larger sale at CanStockPhoto which also helped a lot to raise the total. 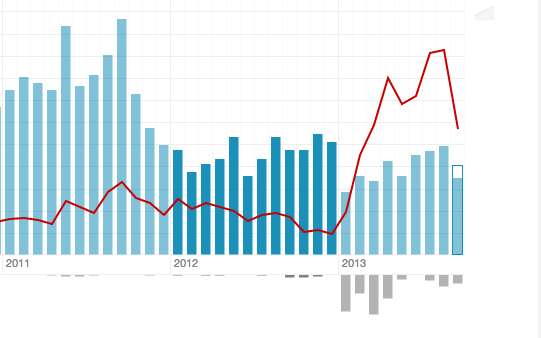 The total for August is looking quite good in comparison with the months before: The third time in a row I achieved a growing amount in sales. And September is looking good enough to make me optimistic for the trend to continue.

In 2012, August was the second best month of the year, only beaten by November sales. And I was quite sure I couldn’t beat it this year with hopes for September and October to make up for it. To my surprise, after all the royalties in August beat 2012 – just by $4 (less than 1%) but still making me happy to see the comparison.

Sure, it was partly made possible due to the Stocksy effect. Things would have looked different if the sales were distributed more evenly across a few months. Then again, with the price changes at iStock I lost about the same amount of royalties which otherwise would have helped me reach the target.

The total royalties for 2013 is now only 6% below the 2012 values, and with September and October having been a bit slower last year I have hopes to close in. For 2014, I am now very optimistic to leave both the 2012 exclusive year as well as the 2013 transition year behind as in both cases the first half of the year was very bad.

The first quarter of the year was mainly focused on uploading most of my portfolio to different new agencies which also required a lot of re-keywording. The second quarter was focused on producing content for our StockSnippets project, while many of those images are being on sale through my microstock accounts as well.

In the third quarter, I moved my focus to producing new microstock imagery on a consistent basis with a (very) limited budget. I am quite happy with the results in the last months, though I still find it hard to understand how others can come up with 2,000 new images (and mostly images with better quality/more organisational effort than mine) per year.

Well, maybe I will continue to learn to be more efficient and better organised.

Outlook for the rest of the year

Having grown my portfolio by almost a third in the last few month, and the last quarter of the year traditionally having been a bit stronger in sales, I am convinced to see new highlights. A bigger sale here and there is more likely to happen as well with a growing number of images online.

However, the development is far too slow to be sustainable in the short term. So if things are going as expected, I will have to dedicate more time to other ventures – writing is one which adds a bit to my monthly totals at the moment but maybe a job with a fixed income is also an option I am looking into right now. We will have to see if and how I can manage to balance that with the time I want to spend with my son and the photography business.