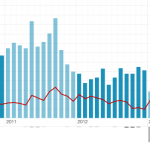 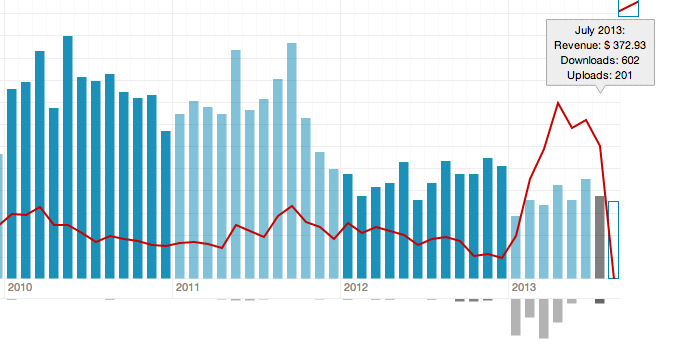 Usually July and August can be expected to be slow month. In most industrial countries, summer vacations are keeping people from their desks and also reduces the amount of advertising. I was quite happy to see that the start of July was actually picking up more sales than expected.

The expected slow down happened in the second half of the month. However, at the last moment, I received a “bonus” with the second Enhanced Download at Shutterstock, so the overall number is in range of the June numbers once the partner program sales are added at iStockphoto. It is likely to become the second best month since I went non-exclusive. 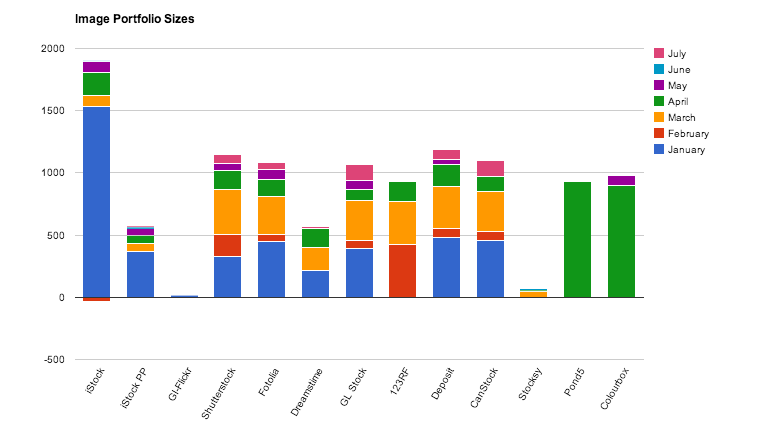 I had stopped uploading at microstock agencies in mid of May. At first it was not a plan but shortly after I decided to save my images for later in the year. I think it is important for images to get downloads quickly after they are showing up on agencies because only successful images will stay on top of searches. Therefore, the early summer with too many clients on vacation is not the best time to give new images a good chance to get found.

In June, I had 11 new images accepted at Stocksy United, and in June and July I uploaded my first 16 images to Westend61. In both cases, it takes far more effort to create a certain number of images as their requirements are higher as are the prices.

In the last week of July, I started uploading at microstock again. I had 75 new images accepted at Shutterstock, and uploaded similar amounts to five other agencies. I skipped uploading to 123RF – their sales are too low for me to bother too much.

I also did not upload the most recent images to iStockphoto yet. I have not made a final decision how to proceed with iStockphoto after their recent price reductions. They are selling too many images to be ignored but by dropping the average sale by more than half plus offering the lowest percentages in the market plus offering a low paying subscription payment for their partner program they are not going to be my preferred place to sell images in the near future. I have made a few uploads to see if new images are transferred quickly to the partner program sites at least – so far only 570 of my 1,800 images are for sale through the PP but now generating a similar amount than the whole portfolio at iStock itself. Maybe this is the future for non-exclusives: Use iStock merely as a platform to distribute our images to the partner program sites.

One of my alternative plans – besides trying to focus more on higher priced agencies like Stocksy and Westend61 – was to start offering more images exclusively at Fotolia. Unfortunately, Fotolia reacted to iStock’s price reduction by introducing their own new pricing system. So I am somewhat stuck at what to do.

However, I am not going to waste the best season for selling image licenses by overthinking the situation. I will try to upload as much as possible over the next three months, including some sets of seasonal images for Christmas and New Year’s, hoping to quickly grow my overall sales in the next few months. I can still re-think my strategy during the holidays.

Downloads and Royalties in July 2013

The month started stronger than expected but slowed down in the second half. Then on the 31st, I was surprised to find another Enhanced Download at Shutterstock for $28 (the second this month) which lifted the monthly amount significantly.

So far I had 6 downloads with prices between $18 and $80 so far, among a total of less than 2,000 downloads at Shutterstock. At iStockphoto, we had a base rule that one Extended License would come with every 1,000 downloads, so Shutterstock is well ahead of that number. I am close to reaching a total of $1,000 with more than $200 per month right now. At the current rate, I will most likely reach the second earnings target of $3,000 within the next six to eight months which will increase my royalty share by another 10%.

At iStockphoto, the number of downloads almost doubled over May – and the royalties dropped by about 20%. This is the result of the recent price change for the main collection. Customers appreciate the lower price, so a number of them turned to images like mine instead of buying higher priced images. But the average royalty paid per download dropped from $1.69 in May to $0.74 in July. And due to the annual system for fixing royalty rates at iStock, I am likely to get pushed down another level in 2014, as at the new prices I am not only getting less payment but also less reward points for their system. 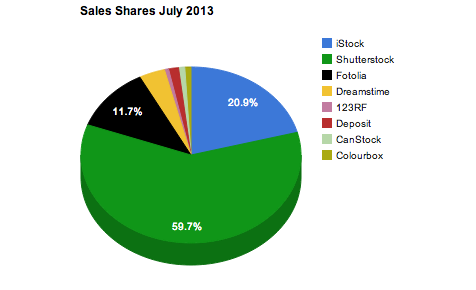 The other agencies did not show significant changes: Fotolia made some sales less than in June, Dreamstime recovered a bit from the very bad sales level the month before. Depositphotos, CanStock and 123RF are fighting at the low end.

At the current stage, it looks like Shutterstock will dominate the overall royalty payments for me in the near future. When iStock’s partner program numbers are added, is it likely to match the direct sales at iStock but Shutterstock will still have a share of about 50%, and both iStock and the partner program will be in the range of 16-18 per cent. Fotolia is on third place, Dreamstime significantly behind and all others are only marginal.

To avoid growing a new dependency on one single place to provide the majority of royalties, I plan to produce a number of images exclusive for Fotolia – as they are mostly strong in Germany, France, Italy, I believe that local (language) images are having good odds of making more money being offered at Fotolia exclusively rather than distributed across all sites.

Looking into the near future

August is the second part of the common summer slowdown, with Southern Europe (France, Italy, Spain) usually to be completely out of business. It might start picking up better sales in the second half as parts of Northern Europe will get back to business. I don’t expect it to be record breaking, though.

I have high hopes for September through November, though. I decided not to upload the (few) seasonal I have produced last year when I went independent. Those images worked quite satisfying at iStock last year and I have hopes they will do well on the other agencies when they pick up sales in fall. The first of those images are going live these days and I have seen an occasional christmas download already.

In addition, I have a significant number of images shot which still need post processing. I will try to go through most of those images in August and grow my portfolio by a few hundred images on all agencies. Those images should be live in September which usually is one of the best months of the year for image sales.

After November, I am not sure how to proceed. Other changes in my life are going on and the sales are not growing quickly enough to become a significant part of my monthly income in the near future. I still make some money from writing and social media activities for different companies, however I might be looking for a full time job again. This feels a bit frustrating as I still love the independence and the amount of freedom – and time to spend with my three year old son – but economic necessities are calling for alternative plans right now. If you have other ideas how to quickly double my income, I’m willing to listen to (almost) anything right now. 😉