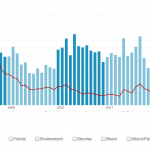 October was a brilliant month for me in sales overall. As can be easily seen from the graph above, the royalties earned were far higher than in the months before, actually beating every month for the last two years. I have to go back to October 2011 to find a month with higher earnings, and with the iStock partner program still missing, even that level is likely to be reached.

So is this an overall trend? I would hope so but I have to be careful as there have been two major impacts on the monthly earnings: Stocksy United has sold five licenses for my images, two of them in large size. With the 50% royalty share and higher prices, these sales alone contributed a huge amount to my earnings. Also, Shutterstock has sold several larger licenses. So while download numbers were slightly lower than in September, the earnings have marked a new record.

https://www.tribalstudioz.com/zda6up6 However, even if I remove those two big effects from my sales, the month would have set a new best month since going non-exclusive from iStockphoto at the start of the year. So the trend definitely is positive, even though maybe not as steep as it looks for the last month alone.

The number of downloads were down a bit across agencies but not remarkably.

https://escueladenuevasmusicas.com/m1wwbcrm iStockphoto has set a new low in earnings with less than $80 from 112 downloads. This is even lower than the summer month July just after the price reductions for non-exclusive imagery. I am consistently making more money from the partner program than from iStock itself these days.

Shutterstock has seen a drop in download numbers but a huge raise in royalties earned. One very big license and two Enhanced Licenses contributed a lot to this, so only one third of my earnings have come from their classic subscription model.

https://topcarmag.com/sbyflr8.html Fotolia has recovered from the bad month of September and is steady in the third position among my microstock agencies after Shutterstock and iStock. Those three agencies provide for more than 90 per cent of my microstock earnings and I keep cutting my efforts to submit to other places unless they make uploading easy and straight forward. I keep submitting my images to Depositphotos, CanStockPhoto and 123RF since all of them are making the uploading pretty easy.

https://purehempbotanicals.com/e4sdkyo The big star in October was Stocksy United: The 50 per cent cut for the photographer plus the higher prices for licenses make a huge difference. I “just” made five sales (which still is remarkable for a portfolio of less than one hundred images) but those licenses made me a total of $150 in October. This contributed about one fifth of my overall earnings.

I managed to upload a few new images to my portfolio at Stocksy United with the goal of reaching at least 100 images before the end of the year. With higher prices and higher shares, the mid term goal is to produce more content here and to macro agency Westend61. Financial restrictions and limited time did not allow me to push these as quickly as I would have wished for.

http://freshisthepodcast.com/mg794xz To the microstock agencies, I have uploaded roughly 100 new images in October. My portfolio size closes in on 1,500 images at the most agencies, depending on their review and acceptance criteria. I have kept my target of at least hundred new images per month for the last four months, despite some obstacles in this phase. I have just moved houses and have set the same target again for November and December but want to move it up for 2014.

Ambien Brand Name Online The progress has been slow but steady, so I am not unhappy with the results. I wouldn’t see why I should change things dramatically at this point. A bit more here, a bit more there and it might turn out well in the mid term.