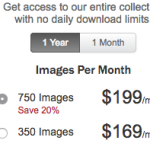 As a regular discussion point amongst stock contributors, there is a question how many images of their daily or monthly package subscription buyers of stock images at sites like Shutterstock, iStock or Adobe Stock are actually using.

The easiest way is to look at Shutterstock’s price plans: 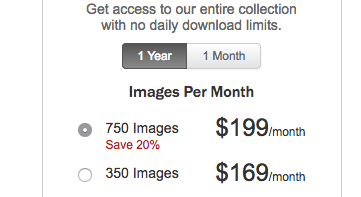 The original basic plan is for 750 images a month (used to be 25 downloads per day) and costs $199 per month. It is rather obvious that this plans would lead to Shutterstock’s bankruptcy if all users would use up their contingency of 750 images and Shutterstock would have to pay out 38 cents for each of the downloaded images as 750 * $0.38 results in $285, almost half more than the cost of this plan is.

Luckily, Shutterstock is a listed company and needs to report their quarterly earnings and costs to the SEC. We can peak into Shutterstock’s financial details every three months. On page 25 of last quarter’s report, I found a note that royalties “rose by $6.2 million or 20%” which means that the royalties were slightly above $30 million in the second quarter of 2015 and reached $36 million in the second quarter of 2016. The revenue in this quarter was $124 million, so the average royalty paid is slightly below 30%.

We also know that their Earnings Schedule for contributors lists four levels with royalty percentages of 20%, 25%, 28% and 30%. While a majority of contributors are probably at the 20% or 25% levels, the huge majority of downloads is being generated by the more successful contributors at the 30% level.

The simple logic says that these percentages were based on what Shutterstock used to pay out effectively with their subscription royalties of $0.25 up to $0.38 in which case the $0.38 would equal a 30% share. Reverse engineered, the average subscription download generated slightly less than $1.30 in revenue for the company. Based on the monthly price of $199 we can conclude that the average subscription user only uses around 150 downloads each month.

Surprised? If you are, you’re not thinking like a customer, you’re thinking cheap. First of all, most subscriptions are not paid by the person actually using it but by their boss, employer, company, customers, agency or whoever. The person using the subscription has not invested personal money, and so they have no interest to download more images than they actually need. In addition, searching for images and downloading them costs time, and it is unlikely that people are willing to spend their work days, evenings or weekends to “use up all downloads we bought”. It can happen, it does happen with some customers most likely. But that’s a small minority.

You might also see that Shutterstock nowadays offers a second package of “only” 350 monthly downloads at a discounted rate of $169 a month. So that’s less than half the downloads for a mere 15% discount on the original package. This supports my calculation that no matter how many downloads a month you are offering the users, they are likely to just fill their needs and not more.

However, other sites have introduced far smaller subscription packages, like Adobe Stock’s 10 images per month or iStock with different sized packages. But again, the prices for those packages are much steeper, like Adobe asking $30 a month for 10 downloads, and iStock costing even more. That is obviously due to the fact that those packages will be used up much more regularly than large allocations for 750 downloads. Smaller packages mean smaller users who are likely to be more cost aware; although they will also not interrupt their summer vacation to use up the ten images they paid for. But as a general rule, we can assume that the percentage of allowed downloads actually being used is growing with the shrinking size of the package.

So when discussing about expected average royalties based on subscription packages, please don’t just simplify your arguments by thinking any subscription is always being used up. Logic and facts are contradicting this assumption.