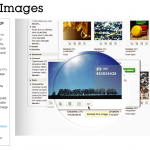 This is certainly a news-heavy week: After iStockphoto had just announced their own subscription program, the ever growing demand for smartphone pictures reaches new heights with Fotolia offering a huge bonus for uploads, now Getty has launched a new feature: The Embedded Viewer. 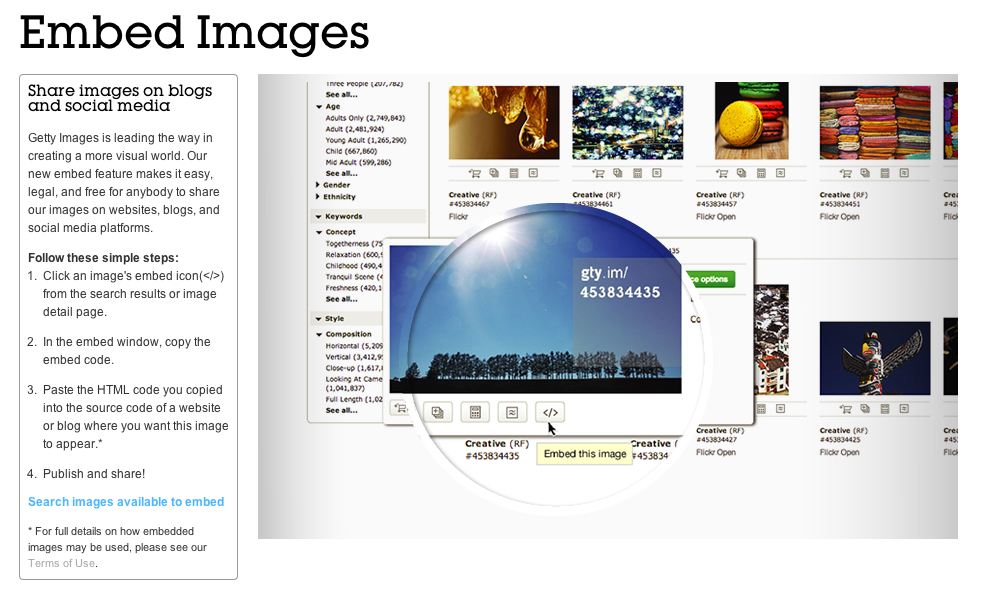 Basically Getty Images is now giving away images for free – under certain conditions: The images have to be published within an iFrame, giving Getty access to your user data, a backlink and some social media sharing options (basically free advertising) and the possibility to add something to the image at a later stage. Most likely this could be advertising on top of the image.

Who is going to use this new feature?

The target audience is clearly the market of small bloggers and website owners who can not (or do not want to) afford image licenses. There are just too many of them using free (Creative Commons, Public Domain) images – or using them illegally from Google Images or Flickr.

The conditions explicitly exclude commercial uses like advertising or sponsored content. Though, Getty’s definition of “non-commercial use” is pretty lenient. Basically they are allowing all editorial uses, including those cases where a blog or website is running ads on their site (like me). Obviously this is meant to broaden the potential audience for this new feature as far as possible. In theory, any major newspaper could use those images for free in their online sites.

They are not likely to do that: For one, they have contracts allowing them to use images at a very cheap rate already. More important, they will not be willing to give away valuable user data plus the back links leading away from their site. Especially the social media links in the Embedded Viewer will discourage larger publishing companies from using this feature.

So there is a good chance that a large number of paying customers is not going to switch to the free image option anytime soon. However, there will be a number of small blog publishers who were willing to pay a small fee for a nice image supporting their newest article in the past. And for some of them this will actually save some money – and thus reduce the number of licensed and paid images. But I don’t think the numbers will be huge.

How is it supposed to work out financially?

As we all know, Getty is not a bunch of nice guys trying to do good to the world. They are planning to make money. And as a business, it’s their job to make money. So they must have a plan.

Well, yes, the plan is obvious and they are openly talk about it: Instead of making some blog owner pay for the image use, they might find a company willing to pay for advertising. So they will have to figure out a way to display an ad along with the actual image the blog publisher wants to use. Youtube is already doing that and – as far as I know – their owner Google is quite profitable.

As you can see, I am running Google AdSense banners on this blog. I have three banners on each page that you look at and I get sometimes paid for just displaying an ad and sometimes only if someone clicks on it. On average, this makes about €2 for each thousand viewers (please replace the € sign with a $ sign across this whole article – these are just rough sample numbers anyways). And in a very specialized topic like “stock photography”, it is pretty hard to get thousand people to look at one of your articles. I assume that the Embedded Viewer is likely to be displayed on blogs like mine, run by a single person or very small team on a limited topic with irregular updates.

So to make serious amounts of money, these images need to be shown on thousands or millions of pages. That is clearly Getty’s strategy as they announced themselves. At one point they might get a thousand pages to be displayed a thousand times each day, adding up to a million views. So they will be able to sell advertising space worth around €2,000 for that day. Multiply that a couple of times and add it up to a whole year and we are talking about serious money. Millions at least. So it will most likely work out financially. Especially because it is targeting on a broad range of pages that are not showing legally purchased images today in most cases. Yes, it’s not a dumb move. If it works out as Getty hopes, it can become an interesting opportunity.

How much money can be expected to be made from this?

The problem is, we as photographers have a different perspective: Because those thousand pages getting thousand views are more likely to show twenty thousand different images. So we are splitting up the €2,000 revenue among 20,000 photographers for their works. And as usual, the contributor will only get a 20% share. Did you do the maths in your head? Yeah, I’m coming up with something like €0,02.

Well, that’s just a speculative number, of course. As recent history (does “Getty Connect” ring a bell?) shows, there is a likelihood that in many, many cases the actual number will be different. Smaller. Like €0,00001. And if you remember how rounding a number works, you can figure out how much will reach the photographer’s pockets.

Okay, there will be some different cases: Like if you just shot THE picture from a local event. It might be displayed over and over again, shared on Twitter and Facebook, Google+ and Pinterest. Being seen by millions or billions of people. And each time a little ad will make you €0,00001 – multiplied by a million this will actually make you €10. Congratulations. And I am sure we will eventually get to here a “success story” of someone having made thousands of Euros with a single image.

Well, it’s like Youtube already shows: There are a few stars running successful channels but most users just supply videos to be seen a few hundred times by close friends. And hey, even if you ask the “big stars” on Youtube, in many cases you will find out they are making the real money by selling merchandise, songs through iTunes or books through Amazon – even for the big starts, Youtube is mostly a promotion channel with the added benefit of making some money in addition.

No, I can’t judge Getty for doing something wrong or evil. Their reasoning makes sense, their solutions seems appropriate. And I am not sure if we – as photographers – are going to lose anything through this. But I am sure the huge majority of us is not going to profit from this either. So I am not too unhappy that most of my images are staying out of this program for the time being.