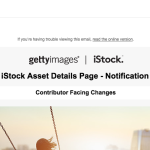 Announcement by Getty about iStock changes

In an email sent out to contributors earlier this week, Getty has announced the next steps in what they call their Unification project, including a major change that might get lost in the series of messages on how the integration of iStock into the Getty IT platform proceeds:

Starting August 20th (or shortly thereafter), and after Unification, you will need to submit a request to deactivate a file. Please note that we will only consider deactivating files for legal or similar justifiable reasons as it provides a negative experience for customers when files are suddenly unavailable for license.

In plain language: You will no longer be the owner of the full right to decide where, when and how your images are going to be distributed. Once uploaded to iStock, you will not be able to change that decision at a later point. You will not be able to move an image or series to be exclusive on another platform. The message also clearly states that deactivation requests will only be “considered“, their will be no guarantee that your images will be removed even after you requested so.

So let’s draw a worst case scenario: What if a model at some point in the future decides that they don’t want you to continue licensing your images? Formally, the model has signed a perpetual release, so you may not have a legal requirement to remove those images. But since the model is a friend of yours, you would decide that those images are not worth losing a friend over? Bad luck, Getty might decide that they will not remove those images unless the model takes legal actions against you. Unlikely to happen? Well, I don’t know how likely or not it is, or how generous support will be handling removal requests. But the wording clearly says that you have no right at all to demand a removal. The only action you can take at that point would be to cancel your account with 30 days notice.

Dreamstime has often been criticized in the past for their quite strict handling of image removal. Their requirements stated that only a limited percentage of images can be removed within the first six months of submission. In retrospect, this now seems to be a lenient way of handling a problem all agencies are facing: What happens when customers make a decision to buy an image after internal designs with comp images have been created but now the required image was removed.

I do understand that internal corporate processes can take a while, and I do understand the agencies’ motivation to keep the option for customers to license files they may have chosen weeks ago. But this can easily be solved differently as other agencies have shown: For example, by adding grace periods to file deactivation – files will be removed from searches when the contributor wants to delete the images but they might still be licensed for 30 or even 90 days after the formal deactivation.

But since iStock’s parent company Getty Images never offered the option to remove submitted files ever without canceling the whole submission contract, it isn’t a surprise that iStock now took the same decision to not allow image deactivation at all.

This decision is also an important one for exclusive contributors: In the past, there was always the choice to cancel your exclusivity with 30 days notice and then try to distribute your images through other channels. This new change will also cripple the options you will have after canceling your exclusive status. While you would still be allowed to upload the same images to other agencies like Shutterstock, Dreamstime or Fotolia, the new conditions will keep you from deactivating the best images of your portfolio for exclusive distribution elsewhere. And this has been an important part for many of the former exclusive members to increase their revenues. In other words: If you decide to leave iStock exclusivity in the future, you will not be able to start submitting images to almost any of the premium collections on other agencies which require image/series exclusivity. Basically your choice will be limited to distribute your existing images only through other non-exclusive agencies and/or start a different portfolio for exclusive premium collections from scratch.

I am not sure how to react on this news. I have no intent to cancel my contract with iStock at this stage (though at this point I am happy to say I could afford it). But I definitely will take some time before August 20th to go through my portfolio and make a image-by-image decision on which content I can afford to be permanently and unrevocable be with the company and with which content I could imagine even the slimmest chance that I might want to remove them from distribution eventually in the future. To be sure to keep having that option, I will have to remove the images before August 20th. Basically on August 20th my images are going to be married to iStock, until then it is “remove now or forever hold your peace“.