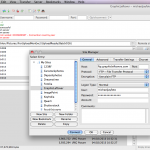 This week I have taken some extra time to make notes on how long it takes me to get a new set of images uploaded to my microstock agencies.

I had all images prepared in Lightroom with Keywords, Title and Description in the Metadata. The set contained exactly 50 images from different setups, mostly series of two to four images per set – some vegetables, some party decorations, some flowers, all isolated on white.

My filing system is to have uploads sorted into folders batch by batch as copies of the original images, so I can keep track what was uploaded already and which images to upload next.

I am using the open source client FileZilla as an FTP client but there are many, many different clients out there and you can make your pick. 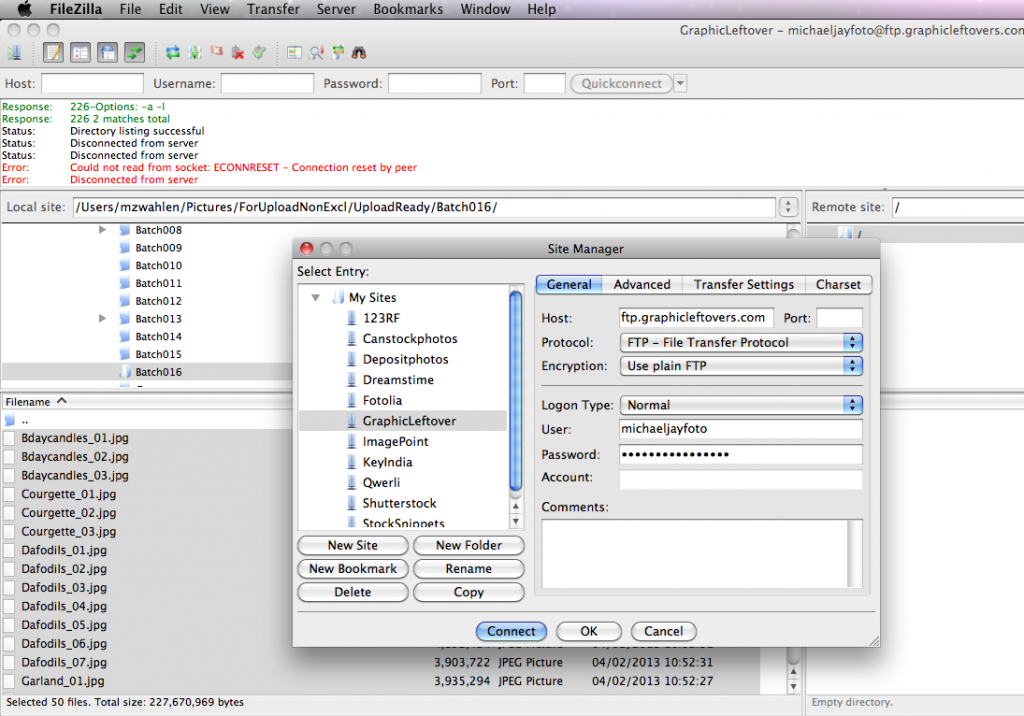 All microstock agencies except iStock are accepting submissions through FTP

The FTP upload is quite easy once you have set up all your accounts: Just open a connection to a server you want to upload files to, select the files, hit the upload button. The FTP program does all the rest. So in total it took me about two minutes to start the uploading process to all seven agencies I supply to: Shutterstock, Fotolia, Dreamstime, 123RF, CanStock, Depositphotos and GL Stock Images.

The upload runs in the background, for those 50 images it took about 40 minutes to upload to all agencies. It can take anything between 10 minutes and a few hours for the servers to move the fresh uploads into your portfolio, so once the FTP process is running I switch to a different task, processing other images or shooting – or start preparing the same images in DeepMeta for iStock.

I ran into a problem with GL Stock as their server reported an error. As two more tries later that day did not succeed I had to move the upload to the next day when it worked without problems. And I wasted a few minutes waiting for the uploads on 123RF to show up until I noticed that I forgot them in my list to upload – so I had to open up the FTP client again, then they showed up quickly. Staying organized and keeping on overview sometimes can be challenging.

Three agencies do not require major tasks after the FTP upload: At GL Stock all images go directly into the queue. It only took about 10 seconds to check if the images were received properly.

CanStockPhoto requires a confirmation that you hold the copyrights to all submitted images for each page of 25 images, so I had to click this twice and wait for the server to move the images to the Pending status. This has taken me less than two minutes.

123RF needs a few steps to get the submission from the FTP account to the pending queue. However, they don’t need categorization, so after clicking a few checkboxes and buttons, images go to review easily. Time to upload was below two minutes as well.

With three other agencies, the requirements are to do categorization on the site but it can be done for groups of images.

On Shutterstock, the upload page shows up to 40 images per page. So for my 50 images, I had them split to two pages. You can select multiple images and choose from a simple and short list of categories. Shutterstock also has a vocabulary for keywords and also checks the description for spelling errors – this usually causes errors for me as my standard keywords often contains a word both in singular and plural version, sometimes I use German words in addition etc. In most cases, the first submission will show me the errors, automatically correct duplications and informs me about spelling questions – I then get to choose from a list of similar words or leave things as they are, so my spelling can overwrite Shutterstock’s vocabulary if required.

The whole process on Shutterstock took me 6 minutes to get all 50 images into the queue.

With Depositphotos, I needed a few tries at the start to figure out the processing of multiple images as their interface isn’t quite up to date. However, once figured out it works quite fine, you can also copy data from a just submitted file to a new one if required (I had one image missing a title). The process at Depositphotos took me another 6 minutes.

On Fotolia, the categorization system is the most complicated as it consists of choosing three levels of categories; and that can be done twice for a main category and a conceptual category. You also get to choose the price level of your images – the bandwidth of choices depends on your contributor level but you need to choose at least the price for Extended Licenses unless you want to stay at the lowest price level. However, the process can be done for multiple images at once on a page of 50 images.

I would have guessed the process on Fotolia takes me longer than with others but to my own surprise it only took 5 minutes for the same 50 images, so factually even a bit less than Shutterstock.

The two agencies competing for the price for the most complicated process are Dreamstime and iStockphoto.

With Dreamstime, I had to categorize each single image from a very long list of categories. The only good things to mention is that the two tiers of categories are shown in one long list, so once you know which categories exist and where to find them it can speed up the process. The second thing is that some or all data can be copied from the recently submitted files to the next one. I use this for the categorization as well. It only gets a bit complicated with larger submissions as the files are not shown in the original order but a bit shuffled, so you might get one flower image, then a party image, then a flower image again.

For 50 images, the process is still manageable, and “luckily” Dreamstime limits the uploads to 140 per week. It took me 12 minutes – about the time for Shutterstock and Fotolia combined. Spending half an hour on this process for 140 images at once is borderline to getting nerve wrecked, though.

The other backside at Dreamstime is that for larger series you need to make an additional image selection. Other agencies hardly cause any issues if you upload five or eight images of the same subject, different angles, different crops etc. Dreamstime starts rejecting images for being “too similar” even if it’s only three pictures from the same subject. Personally I am currently ignoring any rejection from any agency, so I don’t care too much about their strategy. Though, if your plan is to upload a huge amount of images in a short term, you need to cope with these facts as acceptance rates below 80% will cut your weekly upload limits from 140 to 70 or even further. If you want to avoid that you will have to make a separate image selection for Dreamstime alone which takes a few additional minutes.

Quite frankly: iStock can (almost) do what they want, they are selling so good it can’t be easily dropped completely; Dreamstime has been my number 4 earner until now, only inches in front of three others, so I don’t see why I should waste unnecessary extra time on them. I will have to calculate the returns I get from them in the mid term to see if they are worth the effort.

Thanks to having been exclusive to iStockphoto for more than five years, I know their upload process by heart. And obviously I have been using DeepMeta as long as it exists. If that software would not exist, I probably would not bother with the process.

Even with DeepMeta, the uploading to iStockphoto takes the longest: I had a total of 16 minutes spent on my 50 images. First of all, I had to resize/crop two of the images separately for iStock as I had a few files rejected recently for “too much white space” which is hard to avoid if you are submitting a decorative border in a regular 3:2 photo. Now I cropped those two images to a more panoramic image size which will also limit sales – but at least there is the hope for sales rather than for an image that doesn’t get accepted.

Well, then the categorization in DeepMeta at least can be copied over from one files to others which helps speed up the process. The CV keyword disambiguation however can hardly be copied over unless you are certain there are no image specific keywords.

Once all of the images were done and fully prepared in DeepMeta… I have to wait. I had used my 30 upload slots for the week already, so the prepared images stay in DeepMeta until I get the slots freed up in a few days. And then I can submit another 30 images, so the remaining 20 images (along with others) will have to wait another week to get uploaded. With our current image production, the queue of images waiting in DeepMeta is getting longer and longer, I still have almost 300 images waiting to be uploaded over the next three months, and others will be added quicker than iStock wants to accept them.

For the 50 images in this submission it took me a total of less than 90 minutes to prepare and submit them to 8 agencies, and this includes a coffee break and some social media surfing in between the agencies – only iStock will need me to set an alarm clock for upload slots to get cleared.

iStockphoto with 16 minutes and Dreamstime with 11 minutes took by far the longest. Shutterstock, Fotolia and Depositphotos combined took another 17 minutes, and CanStock, 123RF and GL Stock combined about 5 minutes, so the actual work times was below one hour. Now I tend to be doing computer things pretty quickly but even if you take double the time, you could submit about 100 images within about half a working day – spending half a day over the course of a year could result in up to 5,000 images submitted to eight agencies. And there are services out there that offer help with keywording, categorisation and submission to agencies which could actually reduce your efforts as well.

So to be clear: “Having to spend too much time on submitting” should not be considered a valid argument if you consider exclusivity versus independence. There is not as much to do as you would believe if you only know the most complicated of all agencies.

Next: Review and time to market

What happens after the submission? The review on the agencies can take everything from a few hours (CanStock usually is the first to review my files within 12 hours) up to 10 days (Dreamstime was the slowest in editing files for me so far), most take 4-6 days to review images. iStock usually takes about a week for non-exclusive images. And in most cases the accepted images can be seen and bought by clients within hours after review, sometimes a day or two later. There is not much difference across agencies in these aspects.

On sites with strong subscription buyer base, the new files usually quickly attract a few downloads immediately after going live, so I expect the first downloads on the files submitted next week to help reach my goal of getting April royalties a bit higher than the months before.