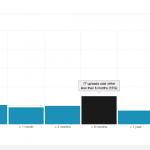 I keep being asked questions by fellow stock photographers who are looking for information how many images are selling how quickly on different agencies. Many of these questions are coming from photographers curious how fast they might recover from the losses taken when going non-exclusive from iStockphoto.

Well, in many cases I can not give final answers that are valid for everyone on every agency. Many agencies just do not have the sales volume (at least for me) to allow detailed analysis. However, I am getting a lot of downloads through Shutterstock, so at least these numbers should allow a certain amount of conclusions.

Sell Through Rates on Shutterstock

Sell Through Stats on StockPerformer

When talking about this kind of stats, it is most often called “Sell Through Rate” – what percentage of images from a given shoot or collection is being sold at all, and how quickly does it happen.

On Shutterstock, my initial understanding was that new images are selling pretty quickly because people having a certain allowance for downloading images might just go through the newest uploads and pick a few images for future use. That would imply that new images are getting a bonus among buyers and this effect would wear off quickly. I was quite wrong with that assumption.

The statistic above shows how quickly images from a collection (a set of files I selected) sold at Shutterstock. I keep track of these with StockPerformer, a brilliant tool to analyze image sales across agencies. I had created this specific collection with slightly more than 500 images uploaded between February and April of 2013. So, on average, those images are online for one year now.

As you can see from the statistics, the largest number of images never sold. However, the percentage is 42% which means that 58% of the images in that collection have at least sold once. This is a pretty high number, considering that only 47% of my uploads on iStockphoto have ever sold, including pictures being online for more than seven years now.

Going into the details: Of those 58% that sold at least once, only 6% sold within the first week, and only 25% were downloaded within a month after uploading the images. And almost 25% of the images took more than two month to find a buyer for the first time. This contradicts the idea that new images are being found easy and might get lost when they don’t get downloaded quickly. Actually 2 of the 500+ images had their first download more than one year after their upload and I will keep watching this statistic in the upcoming second year.

Downloads are stable for about a year

The second interesting statistic is the consistency of sales: With a high volume of subscription buyers I expected a quick rise, a quick fall back to a level that will stay consistent for some time. I did not experience that at all: Sales volume was developing over two months but have since stayed on the same level. What looks like a drop at the end is only due to the fact that I have generated this graph on March 13, so less than half of the current month has passed and the number looks like it will reach the same level as before when March is over.

The images in this collection are very generic and non-seasonal, so there is no surprise not to see any big impacts during summer or Christmas season. But the stability of sales throughout the whole year really was surprising for me.

Similar stats on Fotolia and Dreamstime allow far less conclusions because the sales volume is much lower and therefore I see much more randomness in what sells when. However, the trend is more showing that sales are dying from initial volume on Fotolia and stay more consistent (on a lower level) at Dreamstime. I will try to analyze this more in-depth in the near future.

Overall, this makes me actually a bit more optimistic once again: If sales volume for new images is picking up slower and stays more consistent even in the current situation, it indicates that uploading new images still makes sense to improve revenue over a longer period. Obviously not uploading would not be any help anyways but I see much more of a longer term reward now. Still. I am not convinced it will stay true for many more years but I was wrong with my initial assumptions as well, wasn’t I?