As iStockphoto announced in a Contributor newsletter yesterday, they are going to change the collections and price points.

Well, the basic idea behind this is that the old structure has grown over time with the addition of new collections again and again, the split in pricing between exclusive and non-exclusive files to a very diverse system that obviously led to a lot of frustration with clients. Even the price slider offered in the search only had 4 pricing options, so still at each level you would get a mix of files at different price levels.

From my own experiences of talking to thousands of clients I also agree that the little icons indicating the prices (there was a crown, different colors of cameras, the plus sign icons) were far from intuitive to use unless you were surfing the site on a daily basis. And no client does that.

The new pricing structure will only contain four collections and levels of pricing as seen from the chart below: 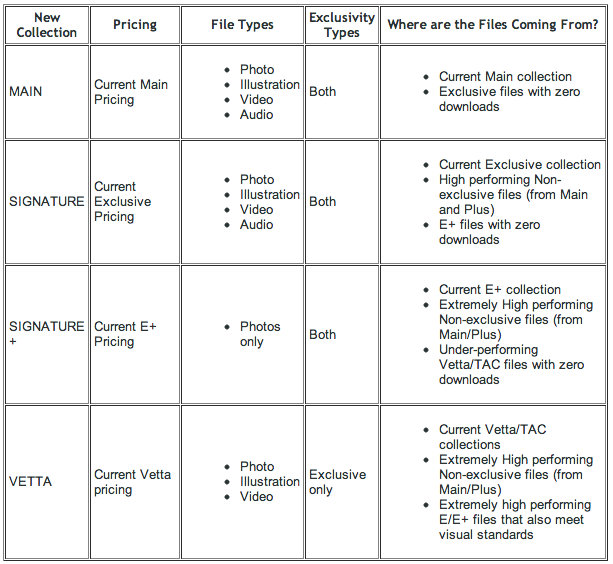 If you look closely, you will first find out that the two premium collections (Vetta, TAC) are being united to one. Also there is no mention of the Dollar Bin, so I assume those files will move back to the main collection. The Dollar Bin was factually given up years ago, though the files got mixed in to regular searches recently. These two moves simplify a lot of things and don’t have a massive impact on the big picture in my opinion.

The second basic change is the “Signature” collection which will probably mainly contain the normal exclusive imagery and the (formerly) contributor nominated non-exclusive Photo+ images. There was a price gap (starting at 2 vs 4 credits) between those collections and apparently the new collection will use the former exclusive pricing – in other words this would mean that “high performing non-exclusive files” will move to a higher price point as before while exclusive images mostly won’t change.

Some exclusive images might move down in price to the new Main collection. Quite honestly, when the prices for exclusive/non-exclusive files were separated some years ago, many exclusive contributors complained that their files were not competitive at a higher price point. And probably for some images that was totally right – having an apple isolated on white selling at $6 while basically the same image next to it was costing $1.50 did not make much sense.

Overall, I agree that the announced change makes sense from a customer point of view and to a certain extent for the contributors as well.

However, there is also a risks/reward scenario involved for contributors: If I read the news correctly, all files from The Agency Collection will move down in price as they are going into the new Vetta collection which is priced slightly lower. I doubt that more clients will buy these images because they will cost $150 instead of $200 in the future, so there is almost a guarantee that royalties from Agency files will be down a bit. Also, files moving from the Exclusive down to the new Standard are doubtful to recover their prior earnings as they will need to sell at least twice as often as before to compensate for the price – however, this will probably mostly affect files with zero or very few downloads, so it might have no big impact.

Then again, the prices for non-exclusive images are going up, at least for a handful of selected files. So for non-exclusives there is a good chance that their earnings will profit from this move – with the risk that the files are going to sell less often at the higher price level, of course. But the clients which are still buying at iStock after all the price raises over the years might be less sensitive about a few dollars.

So as it looks there is a good chance that the risks are mostly lying with exclusive contributors while the potential of rewards are with non-exclusive members. Obviously I feel quite okay being an independent right now as I don’t have to worry too much about the consequences. The best news in this for exclusive contributors is that the simplification might really make the site easier to use for clients and especially easier to understand for new clients. So there is a certain chance that overall sales will profit from the move.