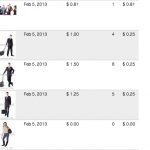 One of the advantages of being independent is the reduced dependency on one specific search engine presenting your images to a client base. The effect of this shows pretty well now: I am seeing more different images showing up in my sales reports – some of them are doing well on Shutterstock, others on iStock and again different ones in the iStock partner program, Fotolia or Dreamstime.

Image from the very first shoot I organized myself in 2008

While being exclusive at iStockphoto, most of my images only had one chance – if they didn’t sell quickly, they would get lost. Some of them had a second chance in the partner program but most did not. Now each image (even those I shot six years ago) are getting not only a second but a third, fourth, fifth chance to get seen by clients, maybe bought and maybe even sell often enough to rise in some other agency’s search to become a constant seller.

For example, the image above was shot in 2008, the very first time I organized a shoot with a group of people all by myself. I didn’t know half as much about light, isolation, concept as I do now, so it’s no wonder they never became big sellers. Still, some of them turned out to be quite usable in my opinion. And now I am making some money from the images again.

Does it make a difference which images are being sold?

In the end, all that counts is the pay cheque, of course. Technically it does not matter if one image sells a hundred times or if hundred images are selling once.

But psychologically I feel much better seeing a width of images of selling. It tells me that images which seemed to be lost on iStockphoto are not technically bad or the content is not attractive to clients. They were just randomly lost among the millions added to the site each year.

Part of a series shot at a minilypse in Bled, Slovenia, in 2012

And while the cost for shoots I’ve made in the past is lost anyways, it makes me more optimistic to plan new shoots if I know that those shoots from the past are paying off. This second image was shot at a minilypse last year. It was quite a bit expensive but it covered six days of shooting. And we went down to Slovenia as a family vacation around the lypse (Bled is a great location for a vacation!), so I didn’t consider cost of traveling as part of the investment.

When I went non-exclusive, I thought these costs were a loss as I can not upload the images anywhere else and though I had a few downloads on them, selling them at the reduced prices and royalty percentage would not make enough money. But even those images now get a second chance through the partner program, and the results are good enough for me to be optimistic about earning back the fee at least. The image above alone had 24 downloads in the partner program within three months so far.

Though it can be quite slow and with tiny amounts, making a few dollars each months from shoots I have done five years ago helps in thinking (right or wrong) that new investments can earn money in the long run.