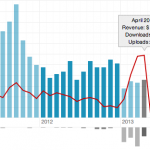 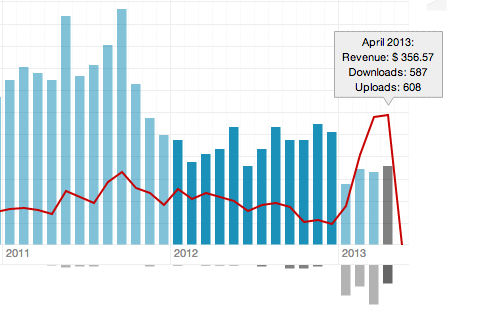 April saw a slow start after the Easter weekend but turned out to become a strong month. I am seeing good results of my upload work across almost all agencies. I was a bit slower in uploading but reached my main targets. And just as I had this article prepared, an Enhanced Download on Shutterstock brought in a bit more money before the end of month. Compared to April 2012, I am now 8% short in royalties but the iStock partner program will probably add another 10-15% to that, so I am quickly closing in on my 2012 earnings and probably pass it for April. 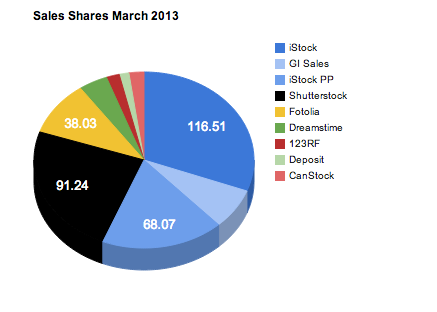 With the Partner Program and one (last) sale through the GI Sale program added, March was just 8% lower than the year before. May 2012 was a bit stronger on iStock, so it will be hard to beat but starting in June I expect to make more money than the year before. Obviously that isn’t my final goal, otherwise I wouldn’t have needed to go non-exclusive but it’s good to see that I am no worse off than before. My main target is to get back to the royalties I have earned in the 2010/11 years which was around $1,000 a month. At iStock it took me 800-1,000 images in my portfolio at that time (of which the first 400 were not really good or commercially oriented). I think the time is definitely over when you could earn good money with mediocre images. Based on my current numbers I estimate it will take me between 2,000 and 2,500 images to reach that level on microstock alone. At the current speed I would be able to reach that before the end of the year.

April was a partly laid back month for me. I have times with high productivity and other times when I hardly can focus on anything. Compared to other times in the last few years, April was still amazing but compared to March things went a bit quiet on my end. I have reached the first target of getting close to 1,000 images in my portfolios at all major agencies. In addition, I have applied with three more agencies – at two of them I was able to put my well prepared images within days, the third one did not reply to my application yet. 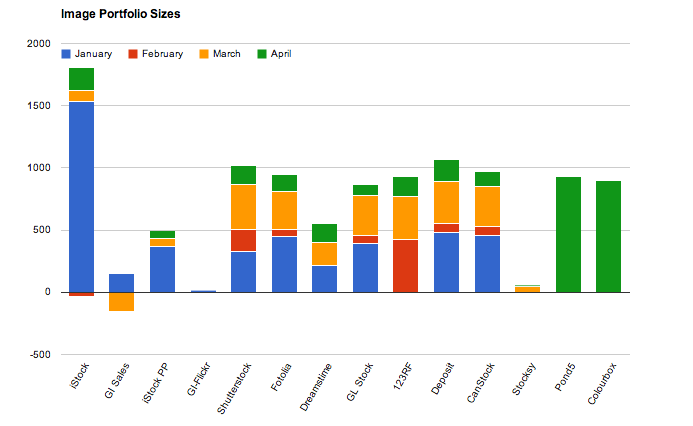 As usual, Dreamstime is well behind as it doesn’t allow uploading a series of four or six images of the same objects/scene. The logic behind this seems to be connected to their pricing: DT doesn’t know “collections” with different price levels but it raises the price based on the downloads an image has had in the past. The more successful an image, the higher the price. They prefer a smaller amount of images, so those are more likely to attract additional downloads and higher prices. Well, I can’t judge how or if that works. But I see on other agencies that I am getting downloads on three or five images of the same series quite regularly. Restricting the number of views or angles a buyer can choose from also limits the potential of serial downloads.

You might have heard that iStockphoto has basically dropped their upload limits by raising them to 999 per week for all contributors. This has helped me upload all of my prepared images (around 200) quicker than expected. Obviously some others have used that chance to clear their backlogs, so I expect the inspection time to get even longer (was 10-14 days for non-exclusives recently). But I have hopes that my images will be added around mid of May, and as new images are showing up in the partner program quickly, this will help with overall royalties.

As you might notice from the chart, I have also added two new agencies to my list: Pond5 and Colourbox. This was a good proof of concept: I now have all my images prepared on my hard disk for direct upload through FTP – it took my computer about three to four hours to upload the whole set of images to those two agencies, all keywords and descriptions included. I had to add model releases on Pond5 and set price levels which took me a few more hours. But it was really quick and efficient to add two more agencies.

Pond5 is mainly a stock video agency, they just added photos to their offer two years (?) ago, so they don’t have a strong customer base for photography yet. They have a unique pricing concept: The contributor sets a price for the largest version of their images (can be done separately for each single image), lower resolutions are calculated as a percentage of the largest size – in my opinion their automatic calculation leads to quite high prices for the smallest versions. For example, I have set this image of a yellow paint roller to a price of $6 for the max resolution (which is really, really low in my opinion) but the smallest size costs $2.40 as a result. This portrait of a business man costs $25 at the largest size which I think is far more reasonable but then the smallest size goes up to $10 – probably too much for a simple web use. I am experimenting with very different price levels. It might be a good place to sell content that you value higher than $1 for a simple use. And they are paying out 50% of the royalties earned – unfortunately that amounted to $0,00 for me so far.

I don’t like Colourbox too much as they have really low payouts per download (well, similar to Shutterstock at the start level) and apparently not even a chance to raise that value nor get more for single image sales. I will restrict myself to simple images (the literal “apple on white” stuff) for them. My main reason for submitting to them is that they are quite well represented in German media and might be a good place for some local editorial content I have. That content doesn’t really sell well and often but might make a little bit of money here. And I have to admit, the images I already put online so far are really selling there. Financially Colourbox is likely to be in the middle tier of agencies for me. 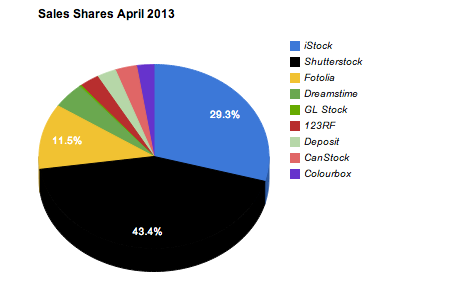 The sales curves for Shutterstock and iStock were showing a trend: Shutterstock is selling more and more, iStock is selling less and less – only in the last few days, iStock picked up just enough sales to match March royalties. Over the whole month Shutterstock took the clear lead, while the iStock Partner Program is still missing for the month. I expect the difference to get bigger once I have reached the $500 level on Shutterstock (which leads to 30% higher payments). I am now at $434 total earnings, so I should pass that mark in about two weeks. In March, my earnings at Shutterstock were $170, with the expected raise and new uploads I expect to be at $250 or more in June. iStock will probably stay more or less at current levels of $120 and around $60-80 added through iStock’s partner program.

Compared to those two, the sales on Fotolia and Dreamstime are well behind: Fotolia has returned a bit more than 30 last month – the special factor here is that they are paying out Euros instead of Dollars for European contributors. So in comparison, this would amount to about $40. Dreamstime has made about $20 but with their special pricing concept I expect a change in download patterns starting in about four months when the first set of my images (those that didn’t sell in the first six months) will move down in price while others which sold are moving up.

The mid range of agencies are all returning royalties in the amount of $10 per month for almost 1,000 images online. But the trends on all of them is clearly up, it will take quite some time to judge if there are mid term effects based on portfolio growth or pricing or whatever. At least I can expect to get at least one payout per year on all of them, so there is no reason to drop any of them right now.

To my disappointment, the agencies with the lowest earnings so far have been the ones I like best for their fair payment structures and contributor options to define prices: GL Stock and Pond5. I can’t say if there is any connection between the two but time will tell more.

I wanted to add Stockfresh to my list of agencies but they have not even responded to my application for many weeks now.

In just a quarter of a year, I managed to upload around 1,000 images to ten different agencies. It was not a full time job and it went fine along with shooting fresh stuff, a family vacation, a contract shoot and lots of other family stuff going on. If I had more images prepared, I could have easily beat that. On the other hand, I had two helping hands with lots of the work, especially processing new images, keywording etc.

Going forward, I will try to continue uploading regulary to all sites. I still have a few hundred unkeyworded file but we also had a good output from new productions. However, my focus will slightly shift away from microstock over time. While I still enjoy a quiet day in the studio taking pictures of objects in the studio, my goal is to produce more images in an authentic environment. I am hoping to get this material up at Stocksy and westend61 to extend my reach to the markets but also because I believe some images require a higher pricing to pay off.

As I have stated earlier, I had a contract shoot (my first one in Berlin) in March and got paid for that in April. That single shoot has made me more money than the 1,000 images on almost a dozen agencies. It somehow puts things into perspective for me. Still, stock photography is a nicer way of making money because you are absolutely free to do what you want and when you want to do it. But money-wise it would be better to get a few contract shoots each month. Which, on the other hand, would require active sales etc…