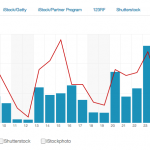 General overview for the month

It has been more than four months now since I started selling my images across agencies. All in all, May has been a huge disappointment in sales for me – usually May has been one of the best months of the year in the past, this year it is way down compared to April.

Day by day stats from May in StockPerformer

Maybe it was the shift of holidays (we had the earliest Easter at the end of March), maybe there were changes to search engines at iStock and/or Shutterstock, maybe it is the sometimes repeated advantage new starters are being given at Shutterstock… I don’t know the exact reasons.

On the positive side: An important event this month was reaching the $ 500 mark at Shutterstock. It means reaching the second level of royalty rates and the biggest leap by about 30%. Now the standard subscription downloads are paying $0.33 instead of $0.25 before, also single image downloads are paying better. This should have helped a lot with the bottom line but as the downloads were massively down, the effect is not visible in my stats yet. The next level at Shutterstock is at $3,000 which is far, far away and I won’t be seeing it for at least a year – then again, it had taken me more than 18 months to reach the second level on iStockphoto as well.

In addition to the numbers reported for April, the partner program at iStockphoto has added almost 200 downloads and a bit more than $50 to the total. With a total of $450, April was actually better than the year before by 3% ($434). May is looking very bad in comparison, with -43% compared to last year, with some leeway for the iStock PP it will be between -25% and -30%. Also it is down from April by about 15%.

Downloads and sales in May 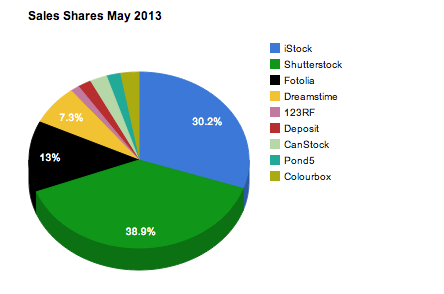 Distribution of Royalties paid by agency in May 2013

The distribution of sales has started to look similar from month to month: Shutterstock has taken the lead in royalties but will be beat when the iStock PP adds another 15% to the total later this month.

Fotolia and Dreamstime are developing positively but slowly. A handful of smaller agencies are adding another 2 to 3% to the total each. 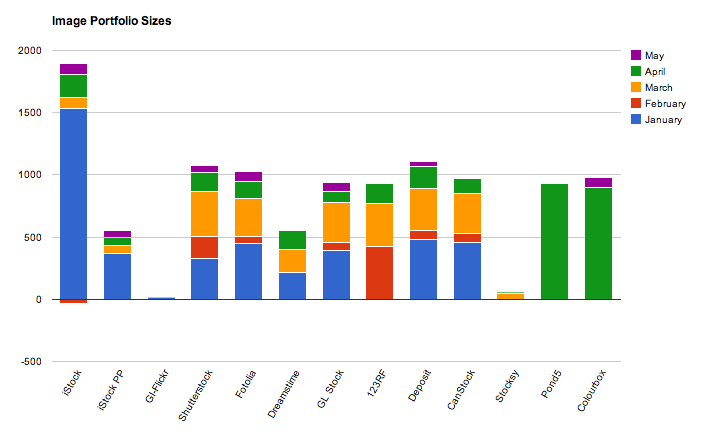 Monthly uploads and Portfolio Sizes in May 2013

After having worked really hard for about half a year, trying to get as many images up across agencies as possible, I had a hard time to get back to uploading in May. I still have a few hundred images on my hard disk to be processed, keyworded and uploaded but the lack of sales did not really help me find a lot of motivation to overcome the lack of energy.

I focused on other topics this month, so the upload numbers are down a lot. I need to get back to working on a regular basis to get more files online soon. I will also try to be early with seasonal images for fall and winter this year, hoping it will get me to another level of regular income in a few months.

My plan is to focus more on new shoots these days, mainly aimed at Stocksy and maybe some material for westend61 to diversify more and get things running at those exciting places as well. Though I know I need to develop my skills to consistently shoot for those collections.

Outlook for the future

The progress I have been making in the past few months has been slow, far too slow for my taste. And it has been cancelled out completely in May – for reasons I don’t even know, so there is not much I can do about. Right now I don’t know what this means for the near future but things would need to speed up a lot in fall to make 2013 a good year.

The best thing to say right now is that for the next ten days we will enjoy our first holiday in three years. By our I mean my partner Maartje and me – obviously we had vacations and trips with the kids but this time we will spend a week alone, trying to regain some energy, enjoy some quiet time. Let’s hope this will help us to get back to full power for the second half of the year.

And I have started two new tasks which will bring in some money from different sources without the camera.