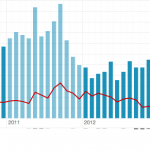 As I had stated in my microstock sales report for May 2013, last month was a terrible set back in the progress I had made before. I am relieved to say that it was just a short hickup and June was back on track again. 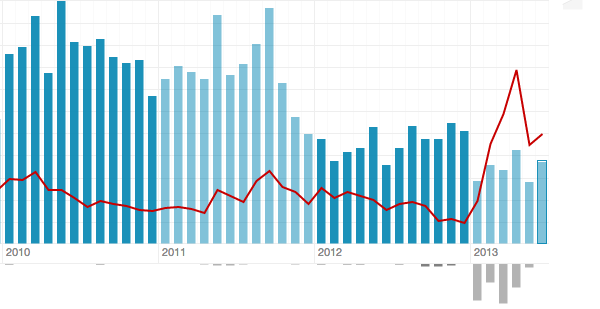 Royalties on my stock portfolio

Despite an expected slowdown as usual during the summer months, the last few weeks were actually well ahead of my expectations. Considering that we took a vacation, and our focus was elsewhere recently, the royalties were even more surprising. For the first time since going non-exclusive I beat myself in a month to month comparison with last year, even without the iStock PP numbers.

My microstock portolios did not grow in the last two months. This is not because we stopped working on it, the number of files on our disks is actually growing. We just shot and processed too much to find the time to upload the results. Some shoots are stuck in the middle of processing, so I want to finish them before sending them off.

Also, it might be a good idea to wait a little longer at this time of the year: Fewer customers mean less chance to get early sales on new files, so they might disappear in searches. I am considering to hold back most of the images a few more weeks, maybe even into the second half of August.

I focused on getting new (though few) files online at Stocksy United as well as uploading the first images to German macro agency Westend61. Both of these are long term projects and I don’t expect them to significantly contribute to my earnings this year.

There has not been a major change in the royalty distribution this month. I am delighted that sales are up at most agencies. A shift in collections (and pricing for some of my files) at iStockphoto has resulted in higher download numbers in the second half of the month. And Shutterstock sold another mid-sized license along with the raise in royalties from May. Both led to higher royalties even though the number of downloads is well below April levels.

Shutterstock has now clearly taken the lead in royalties for me, beating even iStockphoto and their partner program combined. Fotolia also has seen another Best Month. All other agencies have had a mediocre or even bad month but none of them is vital for my total income. The big three are making more than 90 per cent of my royalties and will decide if a month should be called good or bad.

Comparing this year of independence to my last year as an iStock exclusive, June was the first month to be clearly ahead of my 2012 numbers. This is mainly due to June 2012 being the worst month last year – but the surprisingly good numbers this year made the gap wider than expected: I am already more than 10 per cent ahead June 2012 and with the partner program added it will be probably around 25 per cent.

Also, for the whole first six months of 2013, the trend is clearly reversed: I am now only 16 per cent behind the first half year of 2012. With right now two months of iStock PP (May and June) still missing, it should be close to 10 per cent.

If – as usual – the last four months of the year are turning out to be better for stock image sales, I am very positive for the whole year: I already have quite a few of seasonal images on my disk which I did not want to upload in spring and will try to heavily produce more during summer and fall. In addition, I already a few hundred “normal” stock images on my disk which will help me to grow my portfolios everywhere. All I need is another 20% of growth to match last year’s earnings.

This is not my final goal but would be an important step and far quicker than I expected. My goal certainly is to come back to monthly four digit earnings, and I am aware this will take some more time and a lot more images. But the trends for me are pointing in the right direction.

In depth analysis of the first half year of independence

I have decided that half a year is enough to draw a first set of conclusions and have a look back and forward to lessons learned, status and plans. I will publish that article tomorrow, July 2nd. Stay around if you are interested.