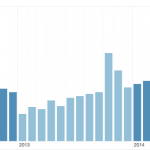 Last year, I have written my look back to the first year of “independence” as well as an outlook to the second year at the end of January. As my exclusivity with iStock ran out at that time, it was logical. This year however, I want to make a cut at the more natural time, when the calendar ends and a new year starts.

As you can see from the chart above (created with StockPerformer, my preferred analysis tool), I have made good progress in my royalty income from microstock in the past 12 months. In 2014, not a single month has returned less royalties than the corresponding month the year before (* there is an “optical illusion” in the chart – October 2013 was the month when iStock screwed up the PP calculation, and they never corrected their stats, so the bar is higher than the actual royalties I earned in that month). And every single month has also been more successful than the corresponding month in 2012, my last year as an exclusive iStock contributor.

Even more significant: The numbers shown by StockPerformer and its charts represents less of my overall royalties nowadays. I started to see sales coming in more regularly through Westend61 as I submitted more images over time. My portfolio is still pretty tiny, and W61 CEO Gerald Staufer keeps reminding me almost monthly that I should do more for them. It’s true, and I will but it still doesn’t come easy to me. The same is true for my Stocksy portfolio which started selling on a regular basis this year (Stocksy numbers are included with StockPerformer). But also the EyeEm Market has made some additional sales for me in the last quarter – their own market place unfortunately still is not live but the sales coming in through the Getty collection are adding some dollars to my account each month.

I also started uploading my images to a handful of smaller microstock agencies which are not covered by StockPerformer. While I am seeing sales here and there, now and then, overall I have to say that those places are probably not worth your time if you were to start submitting to microstock these days. Even with more than 2,000 images readily keyworded on my hard drives which I uploaded to those places I rarely get more than $10 a month on each of those sites. If you don’t have thousands of images to be distributed through them, there is a good chance you will not even reach their payout limits. And the market is dynamic, there has been more than one agency that disappeared or was abandoned in the past. As I am signed up with them, have images online and they are easy to cater, I will continue to submit images to them but definitely not if I have to spend significant amounts of time.

My personal business has also expanded greatly beyond the stock photography world. With the introduction of the SMART Collection at Westend61 (which is now also being distributed through Gallery Stock and probably will be distributed through other partners this year as well), I tried to shoot commercial images with my phone last year. With quite some success: When EyeEm opened their market and their own collection through Getty Images, I was able to put up almost 100 images for sale, and some of them made some decent sales. But also the first sales from the SMART Collection have arrived in the last quarter of the year. I also uploaded a few mobile images to Shutterstock and Fotolia, and there were a handful of sales. But all in all not enough to justify shooting specifically for them, especially given that the look of those images is not significantly different from what I do with my DSLR and the mirrorless Sony NEX.

But also in the high resolution imagery, I was able to upload significantly more photos through Stocksy United and Westend61, and I am very happy to see the sale coming in through those channels. I have always been a defendant of the microstock segment of the industry but I have to admit, I just like to see $50 or more come in from a single sale. And it’s interesting to see licenses being sold in China or Korea as well as my home market Germany. Westend61 is offering me channels I could not get into myself directly without having to submit my images exclusively at one place; and Stocksy United is offering me the chance to license images that traditional (“commercial”) agencies are unlikely to accept.

Both places have treated me well last year, and as I am seeing successes, my efforts will go even more into creating and submitting content through those channels. Last year, about a third of my images went into higher priced collections, and I want to raise that bar.

Even outside of shooting stock, I was able to make good money: I have added writing about the industry for a couple of blogs, MyStockPhoto.org being the most interesting one for contributors. I was invited to hold a presentation on mobile photography for printing service CEWE at Photokina in September (thanks to a referral from German stock photographer and fellow blogger Robert Kneschke) which I enjoyed very much. I also have new contracts in supporting roles within the stock photo industry which generate other income streams outside of royalties for me.

I have plans to extend those business streams as well as the stock photo licensing. I do believe that the market for licenses will continue to be very dynamic with more images being added every year, so it will get harder and harder to make significant amounts of money from the licensing alone. But it will stay my main focus, though I will keep my ears and eyes open to make the best of the opportunities I am getting through the industry and outside of it.

Comparing my achievements to my goals

In my forward looking article last year as well as the “New Year resolution” post I have set myself a couple of goals:

I don’t like to call them “resolutions” nor “plans” as with all of them there was no specific path to follow. However, I made half of those ideas come true. I did not reach the 2,000 new uploads after all but I got much closer than I expected. Honestly, I do not know the exact number after all since agencies are accepting different images, I submit different media to different sets of agencies, I supply some images exclusively while others are going to a multitude of sites… it is too complicated to keep track of each single file.

I completely reached my targets for the higher priced collections: The EyeEm collection at Getty Images helped me a lot by accepting almost 100 additional images in the second half of the year. But I also managed to submit new images (even if only a handful) to Westend61 and Stocksy United almost every month of the year. All in all, about a third of my new uploads have gone into the higher priced places – whether you call them midstock, macrostock or anything else is up to you.

Finally, I was able to travel – not as far as I would have wished but at least more often: After an early start visiting four German cities (Bielefeld, Essen, Köln and Hannover) in five days in January, I also took the chance to go to Hamburg and Frankfurt/Main in February. I also was invited for Photokina in Cologne but I did not use that voyage to shoot stock but it still counted for me personally. I also spend a day in Leipzig which is slightly more than an hour away but I only have been there once, about 20 years ago.

As I mentioned last year, traveling is something I enjoy a lot, so I need it for my sanity. I already have places in mind that I want to see this year.

Shooting every day started out as an adventure but I did not manage to get through the whole year. I also will not shoot every single day in 2015, I have too many other tasks to make a promise like that again. However, the idea of trying to come up with a new image each single day has opened my eyes a lot, and with the option to shoot with my phone I made it happen far more often than in the past. I will try to continue to find images worth shooting on a more regular basis rather than short bursts of shoots.

I completely failed in coming up with a more regular daily or weekly schedule for myself. I still think it would be a good idea but my life and business has changed too much in too many unpredictable ways to make it work yet. I will keep the idea in mind, though, and try to find a better compromise between just doing whatever is required at a specific moment to a more regular plan but still allowing the flexibility required to fulfill all my duties.

All in all, I am very delighted about my progress. I have kept or got close to all the ideas and targets I had in mind last year, and the progress in my income is significant. I believe I am truly on the right path, so I will continue and do even better this year.

As I did last year, I will also split my annual post into this article looking back, and another one coming soon which will contain my predictions for 2015, both for the industry in general and my personal situation and future. Stay tuned if you are interested in reading that part as well. 🙂