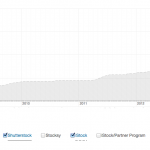 My upload graph at StockPerformer

The end of the year is getting closer and that would be a natural time to check “what did you achieve this year”. As a stock photographer part of that would be to put down the number of images you have produced and uploaded for distribution. While I know that I’m typically a number nerd, I have a hard time figuring out the number of images I have.

Microstock: Not everything is everywhere

With my microstock agencies I actually have a big problem easily saying how many images I have online – and how that numbers has changed:

Among my agencies, the portfolio at iStockphoto still is the largest by far with almost 3,000 images these days. But this includes a few hundreds images that are still exclusive at iStock: Photos I shot at iStockalypses and minilypses, their organized group shooting events, because part of the deal at those lypses is that the resulting images will not be distributed anywhere else; some older images I found are not valuable enough to be re-keyworded and distributed to other agencies when I dropped my exclusivity; the editorial images I had at iStock are mostly outdated, don’t sell that well over all and won’t be accepted at all other agencies anyways. I can’t really say how many images exactly are affected by this.

Then there is my most important microstock portfolio these days: That one on Shutterstock makes the best monthly returns. I have about 2,350 files at Shutterstock – and this includes 120 videos which are not available at iStock as well as some images that never made it to iStock (e.g. from the time when iStock still had upload limitations). I also have some images exclusive with Fotolia. However, I didn’t really track those, so I can’t tell how many exactly there are. But I think it must be around 100.

But both, Shutterstock and Fotolia are applying image standards to their submissions. So I get rejections. Not many but some. So again, there are other agencies having other images online in addition to those that made it to either iStock, Shutterstock or Fotolia, or all of the three.

In addition I am taking part in a microstock project along with Westend61, a well know macrostock distribution agency which also entered the field of microstock this year with a mix of older macrostock images (mostly authentic lifestyle) and new microstock images shot by a handful of their photographers.

Mid and Macro Stock is easier to count

With the higher priced agencies, the counting is far easier for a simple reasons: Those agencies are always image exclusive, so I have no duplicates across them.

At Stocksy United, my portfolio has grown to about 180 images this year so far. Still not a lot but more than double of the 89 I had in there last year. With Westend61, I keep track of two different numbers: I have 96 DSLR images in their royalty free collections (deliberately none in the RM section which I could supply to as well). In addition, I uploaded 244 images to their SMART collection which consists of mobile images only. I separate those numbers because the DSLR images are being distributed through their well established network of partner agencies around the globe while the SMART collection is a more exclusive project started end of last year. Those images are mostly available through Westend61 directly (and just recently are also being offered through GalleryStock). So I treat the SMART images as more experimental with regards to sales potential as well. End of last year, I only had 16 DSLR images online with Westend61, so this is a huge jump.

Another addition this year is the EyeEm collection at Getty Images, this is mobile (and mobile style) imagery and so far 86 of my images made it in there. I also still have 17 images online through the former Flickr-Getty connection (and actually had 2 sales for $55 this year), unchanged from last year. Finally, there is 500px Prime which I just uploaded the first 12 images this fall.

All in all, I put roughly 500 new image online this year (so far) on these higher priced market places. And I have to say, I am very happy with the sales I am seeing through these channels so far. I expect these to grow further as with higher prices it takes far more time to get a regular return.

The importance of running detailed statistics

I found that while keeping statistics and analyzing data is more or less a hobby of mine, the more I keep focusing on making money, the less time I (want to) spend with statistics. When treating photography as a business, only statistics that serve a specific purpose are really what you need. It’s a smart idea to keep track of your investments and the return you make on that. It’s also interesting to keep track of the time you spend and if you can find ways to make more of what earns well and less of what doesn’t make any money in return.

However, keeping track in too much detail of how many images are online where and how much do they sell – I don’t really see the value in that. Once I have shot, processed and keyworded an image, it is not really important if it’s online at 5 or 10 agencies. And given that no single image is making a big impact on my bottom line, even if I forget to upload a few images to one agency, I don’t believe it will have a measurable impact on my earnings. I’d rather finish a few more images than keep long lists or tables of images and where I have them online. It’s nice to have a rough overview of RPIs, RPDs or ROIs.  As you can see in my blog regularly, I use StockPerformer as a platform to give me that quick overview. I keep my images in Collections to have a quick look which part of the work pays off best and which ideas fail to make money. But trying to keep these numbers accurate to a hundreds of a percent… not worth it in my opinion.