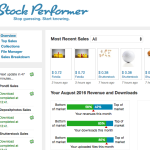 Microstock analytics tool StockPerformer(*) has started a new tool: Rankings! As they explain in their blog post on this new feature, users can now see live and in real time how their portfolios perform in comparison to the other users that opted in to the anonymous system. 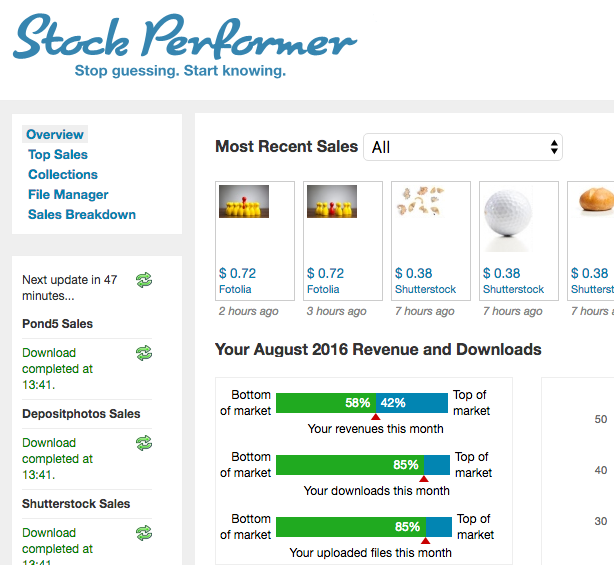 The new feature may be considered as fun to a certain extent but I think you can draw actual conclusions based on the data with some imagination. If it will help you improve your results is arguable but over time you might at least develop a sense on how your portfolio is improving (or not) compared to the market.

First of all, the ranking on the main page (Dashboard) shows the current month’s values. You can compare yourself to the “market” in three areas: Revenue made from your content, number of downloads and the number of files uploaded. I’d say the last of the three is not really all that helpful as a number by itself. It will probably help those on the absolute top to find out if their portfolio growth matches the competition but for most average contributors like me, number of images uploaded depends on too many factors and varies a lot. Maybe I can use this number as an indicator over time as well but right now I’d say it doesn’t make a difference for me if I am in the top 10% or in the bottom 30% in any given month. 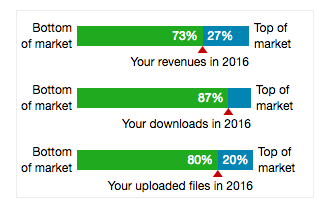 After the first look this morning, the other numbers in the Ranking came as a little surprise: Given that there are a lot of hobbyist contributors in the market, I would have expected to score better in the revenue section. Happily I figured that I am having a rather bad August so far, especially the lack of sales at Stocksy United this month weighs heavily for me.

This can also be seen in the rather large difference between the Revenue and the Downloads ranking. While the number of downloads is well within the top 20% of the contributors (even a few points better overall in 2016 compared to August only), the revenue stays far behind in August. The annual numbers for 2016 show a much better picture as the expensive downloads on Stocksy United bring in a lot of revenue without adding a lot to my download numbers.

Considering these effects, it is also important to understand what the user base of StockPerformer (most likely) is: I doubt there are many users that make only a few dollars each month as the cost for the analytics tool wouldn’t really pay off. However, as part of a cooperation, all users of Stocksy United are using StockPerformer as sales statistics tool. So that’s close to 1,000 contributors of which some may not have had a single sale as they only have few images online with Stocksy United – others will rank badly in downloads but very high in revenue as they only sell through Stocksy and not through microstock agencies. The new, more recent partnership with Addictive Stock only brings in 60 users but given that that agency is brand new, I doubt there are many contributors with high revenue numbers yet. Obviously not all of those users would have opted in to the ranking system as this is a free decision for any user. So it is just a bit of guessing if the huge number of StockPerformer users coming through those partnerships has a similarly huge impact on the ranking stats or not. 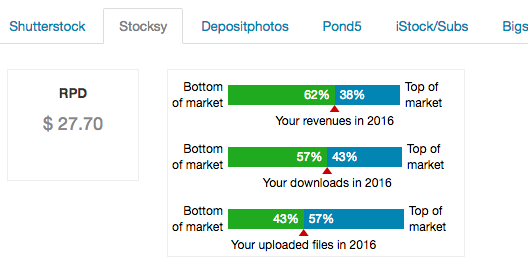 On Stocksy United, my images are above average which came as a little surprise to me since I only managed to upload little more than 300 images in three years

As you can see, my portfolio at Stocksy United is performing rather well in 2016 compared to the rest of the users who opted in. At least my assumption is that this statistic only includes accepted contributors at Stocksy United. In this case roughly two thirds of Stocksy artists are making less revenue than I do so far this year. My revenue number is slightly larger than the download number since two big extended licenses added quite a few dollars to my account. The number of files uploaded is an area I need to work on obviously.

Beyond those partnerships with Stocksy and Addictive, users paying for their accounts are likely to be above the hobbyist level and making at least a few hundred to a few thousand dollars each year in royalties to make StockPerformer worth their fees. So I assume being in the top 70-80% in this self selected group is already quite an achievement. But the way into the top 20 or even 10% is likely to be very steep as I’d expect a larger number of the big shot contributors are using StockPerformer. 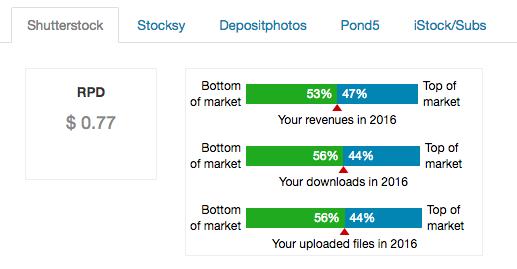 Compared to my Stocksy numbers, the Shutterstock values are showing my images to be more in the mid field of the game which is perfectly what I would have expected. In a way, this can be seen as a positive sign: There is lots of room for improvement for me in these agencies. Looking into the details shows me that my portfolio is exceptionally weak at Fotolia (which I also was aware of before), another indicator I can use to improve my work at certain agencies and figure out which agencies work best for my images.

I am not sure yet how all this data can be put into good use but I will keep track of how the numbers are going to change over time to find out if my workflow is getting better or if I become less competitive over time. Obviously it won’t be a big game changer for me but it is a nice piece of a big puzzle as most agencies nowadays have removed all sales and success statistics from their contributor and portfolio pages. And as the data is completely anonymous, I don’t see any harm in letting the community have my input added.

Are you using StockPerformer? If you opted in to the ranking stats, how are you doing compared to me? If you didn’t opt in, I’d be interested to learn what the reasons for your decisions are.