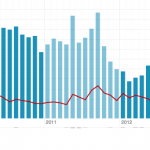 StockPerformer screen shot up to July 2013

iStockphoto has taken quite a while this time to process the downloads from the partner program for May and June. Apparently, it started with a wrong import of Getty Sales for exclusive contributors, followed by an error that only processed parts of the May partner sales. Then they added the June numbers before going back to May. Now it seems to be more or less final with a hint there might be a few days wrong in June.

The number of downloads I am getting across agencies still amazes me. I got used to see around 100 downloads per month on iStockphoto in recent years, at times another 100 added through the partner program. Right now, I am usually between 700 and 800 downloads a month – unfortunately at a much lower sales price but that was part of the expectations when going non-exclusive.

All of this is based on the about 1,000 images I have in my portfolios at most agencies. Only iStock is still ahead with almost 2,000 images – many of which I will not be able (or are not worth my time) to upload at other places. Still I want (or need) to double by portfolio numbers at other agencies quickly to achieve more significant earnings.

Funny to observe: So far in 2013 every second month has been the best so far, and the following month has been settling a bit lower. If this continues, August should look better again. I sure hope so. 🙂

Royalty Distribution by Agency for May / June 2013

With Shutterstock raising the payouts after reaching the $500 mark and iStock lowering the price for the main collection, the trend is quite clear: Shutterstock will be the number 1 source of income in the future. It already has taken over the lead in June, providing more than 40% of my royalties compared to the combined income of iStock and the partner program with 36%. I am also happy to see Fotolia taking a larger share month by month. All others combined are adding less than 10% to my totals right now.

What I like to see is that the iStock related income now makes only about 40% of my income, reducing my risks as planned. The “problem” is that Shutterstock is making up another 40% with a growing trend. So with the current developments I might run from one dependency (iStock) to a different one (Shutterstock). Not the best you could hope for. I still have hopes that Fotolia and Dreamstime will gain more share – with Dreamstime I have hopes that the non-selling images I have in there for almost six months will soon move down to the lowest pricing level. Maybe that is going to help find a few more clients for them.

Outlook for the second half

July started very well and while it slowed down, the summer is not taking as much of a toll as the lowering of prices at iStockphoto does. As it looks like, I will end up with higher download numbers but lower earnings.

I have high hopes that sales will start accelerating again in late August for the fall season. After taking a break from uploading new images, I have just uploaded the first batch for the fall and winter and will speed up the portfolio growth with new images for Christmas soon. As I had shot a few images last year which did quite okay on iStock, I have some hopes that these will take my sales a step further to my goals.